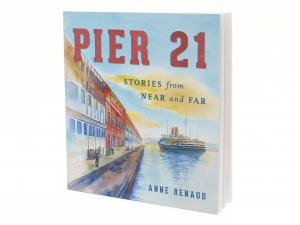 For more than 50 years, Pier 21 in Halifax Harbour served as a gateway to Canada for one million immigrants, refugees and displaced persons. It was also the departure point for 500,000 troops sailing for Europe in the Second World War. The halls of this huge building were witness to the hopes and fears of all the people who passed through seeking a better future.

In Pier 21: Stories from Near and Far, Anne Renaud explores the history of this Halifax landmark, moving seamlessly from the particular (an itemized list of what immigrants received in a welcome bag when they arrived) to the world events that brought them there (the Second World War, the Hungarian Revolution, the invasion of Czechoslovakia). She highlights individual stories of people who came through Pier 21 on a personal level, including Scottish immigrants, British orphans, war brides and Auschwitz survivors. On the political level, she addresses difficult issues, such as racism in Canadian immigration policies and the refusal of Canada to accept Jewish refugees at an early stage of the war.

This book has been thoughtfully designed to appeal to children. Original artwork by Aries Chung, historic photos, commemorative stamps and excerpts from newspapers keep the reader visually engaged on every page. A clever use of small anchor and compass icons in the text correspond to text boxes that give more detail about historic context.

Pier 21 is part of a much bigger story and raises issues that are still vitally important to Canadians: immigration, war and the displaced people of the world. Canada’s history continues to be influenced by the people who come here seeking a better life. Many of the children reading this book will themselves be either immigrants or children of immigrants. By highlighting the dignity and courage of those who passed through Pier 21, Renaud has succeeded in presenting young readers with a vivid illumination of one of the fundamental truths about Canadians: nearly all of us came here from somewhere else.