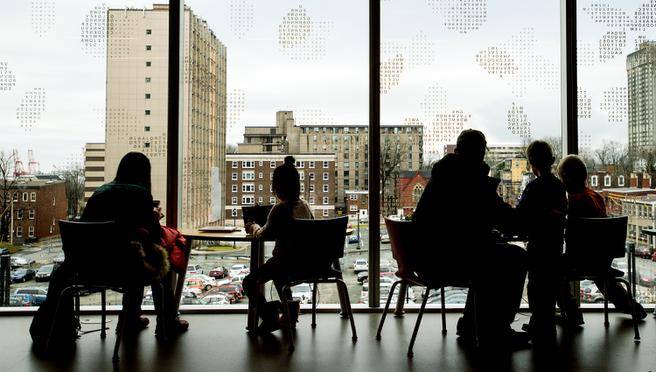 More than just a library, Halifax’s newest multi-use facility adapts to the way we read today—and that includes coffee

The Halifax Central Library has been open three months and it’s clearly a state-of-the-art facility with computers, iPads and gaming stations, there’s access to technology on every floor. There’s WiFi of course, and now library patrons even have access to a world-class coffee shop.

“I go back to the public consultation process, which drove the success of this building. People told us loud and clear that [coffee] was part of the experience they want to have in a library,” says Bruce Gorman, director of Central Library and Regional Services. “If they want to have a coffee and enjoy it any way they like in the library, that’s what we want to offer them.”

Patrons can now take their snacks and drinks wherever they like. “In six weeks we’ve had 270,000 people through this building, which certainly speaks to how many people have ownership in it,” says Gorman. “With the ownership, they’re cleaning up after themselves. We’re not chasing people around and cleaning up their messes. People are respecting their space, because it is their space.”

To the naysayers who think hot coffee, lunch and books don’t mix, Gorman says, “This is the new library. In addition to this being a fabulous library with a great collection, we’re making it another place where you can come and spend your time and that’s just part of the experience for some people, and so far people have really embraced that.”

Christopher Webb is co-owner of the library’s coffee shop. “There’s no secret we’re called Pavia Gallery Espresso Bar and Café. Philosophically we see what we do as not just a coffee shop, we are a contemporary art gallery, and a contemporary art gallery in the sense of a place where ideas are born and discussed. And from that, we also are an espresso bar and café, in that more old-world European tradition of coffee houses being in the places where a lot of the people in a city centre would meet to discuss. We had that philosophy from the get go.”

Webb believes the cafes on the first and fifth floors are two of the busiest in the country. “On a Monday afternoon, a Tuesday afternoon, a Wednesday morning, those tables and chairs that can seat 68 people are full on that fifth floor. Full. With people looking for seating in other spots.” The story is much the same with the 24 seats on the first floor.

Located just steps inside the building’s main doors, Webb and staff see the community support first hand. “If you were here at 11:30 on Sunday morning, there are people spilling out of the foyer, and if it’s nice enough, people outside waiting to get in. Imagine that. The gates open and you can feel this release of people come through.”

That says Webb is the exciting part. “People come in, whether they’re students, seniors, parents with young children, whether they’re community organizers, all of these people are coming and meeting at the library. They’re having impromptu meetings; they’re bumping into friends. We’ve done a lot of catering for non-profit groups that have had meetings in the library. It’s becoming a true city hall.”

Web says coffee is absolutely a part of it. “It’s a way of bringing people and holding people in a space, and the more people are there, the more they’re utilizing the space.”

Patrons can spend their entire day doing whatever they like, from creating a work environment to creating one for play, says Gorman. “In a great city like Halifax I think we need social capital. A lot of people just want to be together. They may not be speaking with the person next to them, but just to be in a place where other people are, there’s a real desire for that. I think we’ve filled an important niche in the city. I think we changed Halifax when we opened.”

For Webb, it feels important to be there. “When you’re part of something like that you need to continue to improve and get better. We need more seating downstairs and we need to bring some food upstairs and I could give you a list of 20 things we need to do to get better. The reason we feel that is there’s this sense we’re part of something really important, to our city, and to our province. This is a world-class building and world-class building is what everyone says it is but I think it’s also a world-class concept and we feel a big part of that.”