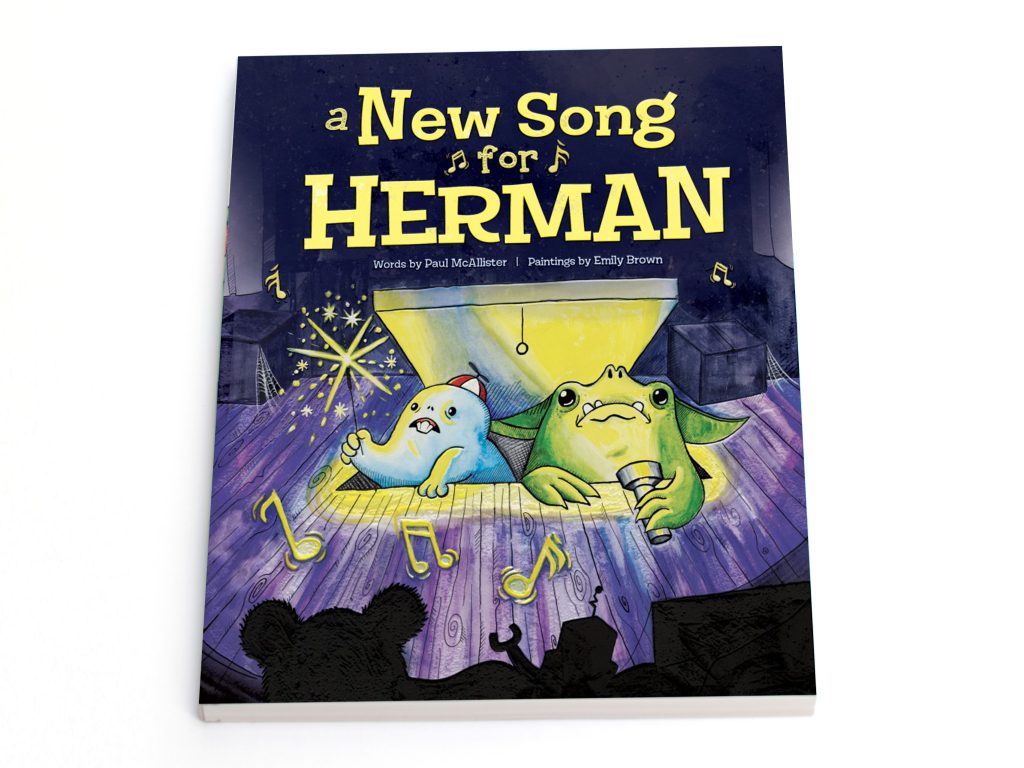 Herman, the loveable monster created by Fredericton’s Paul McAllister and Emily Brown, has returned and this time he’s facing his fears head on. Young readers who were introduced to Herman and his friends in There and Back Again, A Herman Tale, will welcome the monster’s return, as he experiences more fun, adventure and life lessons in the sequel A New Song for Herman.

A New Song for Herman picks up months after There and Back Again ends. As a barista at his best friend Sarah’s café, Herman makes delicious lattes for his customers. One day, Carpet, one of Herman’s monster friends, notices that Herman is looking a little tired—and it’s not because he’s been working too hard. Rather, Herman admits, he’s been “kept up by the strangest noises.” Herman shares the strange sounds he’s been hearing at night and Carpet recognizes them as the dreaded noises made by Attic Monsters—an especially scary kind of monster that will “gobble you up.”

Soon Herman’s fears get the best of him and his work at the café suffers. Carpet and Herman have a long talk and decide it is time to get to the bottom of the mystery and find out what is making those noises. After facing a few challenges, Herman and Carpet muster up their courage and face their fears, to finally discover what is really making those scary sounds. In the end they are surprised and pleased with their discovery, and realize the benefits of facing their fears head on.

This book gently, and in a child-friendly way, talks about the importance—and benefits—of having courage and facing our fears, especially fears of the unknown. These themes are relevant and relatable to children of all ages. The book provides an opportunity to talk to children about their worries and concerns and ways to manage them.

The book has a flair for wordplay and rhymes children and adults can enjoy together, and presents plenty of opportunities for reading and inflection with dramatic emphasis—always welcome in a children’s book.

The sequel, illustrated again by Emily Brown, features monsters with lively and comical facial expressions, which helps the reader imagine their personalities and voices—characteristics sure to catch and hold the attention of young readers.

One note of advice: it is helpful (and more fun) if readers have been introduced to the characters and their backstories before reading the sequel. Although not vital, it helps add drama and context to the story.

Lyla Hage is an entrepreneur and teacher. She also spends her time travelling, reading and writing, and is a columnist for a local community paper.