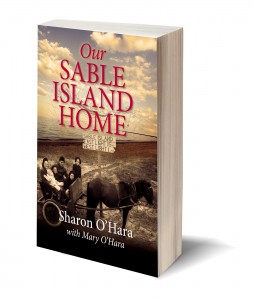 Once we left our house and ventured into the great outdoors, we seemed to become wild little Sable Island urchins, just existing in nature as other living things – no better, no worse. We played and lived our lives on Sable Island far removed from the outside world. We made play out of most anything we came upon, like the place where hundreds of oil barrels were kept. I think most of them were empty, waiting to be shipped out and refilled with gas or oil on the mainland.

Barrel-running was right up there as one of our favourite games – until the day when things went very wrong. We would climb on top of the barrels and dart from one to the next as fast as we could. As we were tearing around on them, one of my legs slipped down between the barrels and I fell. I screamed and cried even as Mary pulled me free, blood streaming down my legs. I writhed on the ground with pain, not knowing which part I had actually hurt. Mary sprinted home to get help. Mom rushed with Harvey to the scene and he carried me home. Mary had stayed back at the house where our two sisters napped.

Mom took me into the bathroom, examined me, washed me, and helped me to feel better, but the sight of the blood scared me.

“You stay here,” she told me. “I’m going to my bedroom to get a big bandage for you.”
In moments Mom returned with a large box.

“Oh, it’s just a name for these bandages,” Mom explained. “They’re used by women. When you’re old enough I’ll explain – it’s nothing to worry about just now.”
I beamed with pride that I got to wear something womanly.

That same evening, in the middle of dinner with the whole family, including Harvey and Bill, I announced proudly to the group, “Guess what, I’m wearing one of Mom’s Kotex bandages.”

There was a stunned silence. Mother didn’t miss a beat.