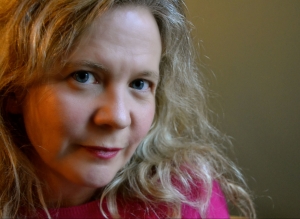 Newfoundland author Lisa Moore can trace her interest in storytelling back to about ten years old, when she took a public art class through Memorial University’s Extension Service.

“It was really through those early art classes that I began to think about being a creator,” says Moore. “That, coupled with reading is, I think, what brought me to becoming a writer.”

Artist Ray Mackie taught the class, and there are a couple of significant projects from that art class that have stuck with Moore over the years. The first exercise was intended to illustrate the concept of sculpture. Mackie gave the students balls of yarn and asked them to string them around the class. Each student had a different colour to work with. The end result was a giant 3-D sculpture made of intersecting lines. Moore says it looked like a “cat’s cradle.”

“We could see our own marks in that space, because of the different colours, but we could also see how our lines integrated with the other lines people had made,” says Moore. “And I think that’s a really good metaphor for the making of literature, because we really do draw our stories from all of the stories that came before. And all of those stories, the stories we’ve read, the stories our contemporaries are writing, they’re interconnected, and they inform whatever stories we happen to be telling.”

In that same art class, Moore also had the rare opportunity to use a video camera to tape the Santa Claus Parade. For her the experience of using what was then a very valuable, powerful piece of equipment was “magical.” Not only was it the “machine that made the TV that showed [her] Gilligan’s Island and Bewitched when [she] went home that night,” it also made her realize that a creator can manipulate the way people experience a piece of work.

“I could see that there was way more to the Santa Claus parade than that little 10-second clip I made,” says Moore. “I could see outside the frame.”

Reading Harriet the Spy cemented her understanding of selective storytelling. For those who haven’t read the book (or who read it a very long time ago), it’s the story of an 11-year-old girl who wants to be a writer, so she collects material by writing observations about her friends in a notebook. Of course, when her friends get their hands on her notebook, Harriet’s brutally honest notes devastate them.

“She was only writing down certain things, and they happened to be the things that really hurt her friends,” says Moore. “But if she were to capture everything she felt about them — they were her friends, they were important to her — it would have been a different story when they read the journal.”

Around the same age, Moore began telling stories to the other kids at recess.

“I’d just recount the book,” says Moore, “but for that brief 15 minutes, I was spilling this great ghost story, and probably adding things. I barely remember doing it, but I do remember the thrill. Trying to end at a suspenseful moment for the next recess, and just having people listen to the story, was incredibly thrilling.”

Over the years, she continued to work with story in various forms, and eventually, while taking a creative writing class at Memorial University, she started submitting to literary magazines. After awhile, publications began accepting Moore’s work.

A workshop with Jane Urquhart stands out in her mind as well. It was not long after Moore published her first collection of short stories, Degrees of Nakedness and, after seeing the high quality of work that many of the workshop attendees were producing, Urquhart helped some of them along by writing letters of reference to publishers.

Moore has published much more since those early days, including the short story collection Open, which won the Canadian Authors Association Jubilee Award for Short Stories, and Giller-nominated novels Alligator and Caught. Her most recent

book though, is her YA novel, Flannery.

Mayann Francis ABT Proust Questionnaire “Flannery’s sixteen, so she’s older than I was when I was doing those art classes,” says Moore. “But writing that novel was a return to that youthful experience of discovery. Getting back into that mindset of what it was like to be a teenager. It’s an emotionally intense time and it was a thrill to revisit that again.”