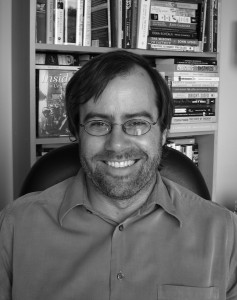 Steven W. Beattie administers the literary website That Shakespearean Rag. Here, he tries to answer the question: why blog?

Why blog about literature? It’s a compelling question, and one for which I’m not sure I have a compelling answer.

Like most artistic endeavours, in Canada, one doesn’t become a dedicated book blogger for fame and fortune. There are easier and less time-consuming ways to make money, should that be one’s ultimate goal. Indeed, since launching That Shakespearean Rag (TSR) close to five years ago, I don’t think I’ve made a nickel directly off any content posted there. I have repurposed various posts, and things I’ve written there have resulted in paid gigs (like the piece you’re reading now, for example). But the site itself is a labour of love.

This is no small thing. A typical post on TSR runs between 700 and 1,000 words, and takes anywhere from two hours to four or more to research, compose and edit. That doesn’t include the time it takes to read a book for review. If Doctor Johnson was right, and only a blockhead ever wrote anything for any reason other than to make money, then I must be the biggest blockhead around.

Why persist, then? In the first place, the medium of the Internet offers the opportunity to write whatever I want, in whatever format I please. This is liberating, but it is also dangerous, since there is nothing in the way of editorial oversight. The temptation to hit “publish” before a piece is entirely honed is great, and in many cases I’ve uncovered errors in thought or fact that an editor would have picked up on. The web allows for these mistakes to be erased as though they never occurred, but this is intellectually dishonest: online writing is in the public domain and it is my feeling that it should be held to the same standards as any other writing.

Indeed, I take the writing on TSR every bit as seriously as I do the writing that appears under my name in any other venue. Craft and thought are important, and these things take time, which is something the Internet is extremely inimical toward. If there is one complaint I receive more than any other about the pieces I post on my blog, it is that they are too long. People generally don’t want to sit still for the time it takes to read a 1,500-word essay or review anymore; they want to surf, to skim, to sample. This is one reason why many former bloggers are abandoning the field for sites like Tumblr and Twitter, which encourage and reward communication in shorter, sharper bursts.

But what these places gain in speed, they lose in nuance and subtlety. It’s impossible to have a reasoned, meaningful conversation on Twitter (believe me, I’ve tried). But it is possible, with a bit of effort on the part of both writer and reader, to engage in an extended, multifaceted argument in the long-form of blogging. This is the kind of thing that is disappearing from newspapers and magazines as they shrink their book pages or eliminate them altogether. And it’s the kind of writing I continue to value.

In many ways, mine is an antiquated attitude and an approach that finds less and less appeal with the vast majority of online readers. My site stats bear this out: unless I’m saying something incendiary (which I’ve been known to do in the past, but which I find I have less and less interest in doing any longer), very few people seem to visit the site, or to remain there long enough to read a post in its entirety. The apparently unbridgeable gap between the values the Internet promotes—and the public seems to want—and the values I continue to endorse left me so despondent that I had to take a break from blogging, putting the site on a self-imposed hiatus for a couple of months this summer.

Steven W Beattie is the former review editor of Quill & Quire. As a freelance literary journalist, his work has been published in newspapers, magazines and journals across Canada, as well as at his own online publication, That Shakespearean Rag.