Old Trout comics a lot of fun to read 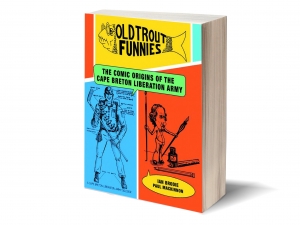 Old Trout Funnies was a short-lived series of comics published independently by Cape Breton artist Paul MacKinnon in the mid-1970s — filled with in-jokes and featuring MacKinnon’s friends in the guise of the Cape Breton Liberation Army. There are digs at back-to-the-landers, mainlanders and the “Professional Cape Bretoners” of the Celtic revival, along with celebrations of local characters.

MacKinnon’s work is typical of the alternative comix of the day, but through a Cape Breton lens. (Superhero Peyton the Semi-Barbarian takes on giant spruce budworms — but wonders if he can make the job last long enough to get pogey.)

This book reproduces all three issues of Old Trout Funnies, plus the CBLA calendars MacKinnon published between 1979 and 2000, along with a variety of previously unseen stories. The comics are a lot of fun to read and folklore professor Ian Brodie’s opening essay sets them in context.

Brodie also includes an exhaustive “Interpreting Old Trout Funnies” chapter, which captures and explains every reference in MacKinnon’s work — from identifying members of the the local rock and blues scene (Matt Minglewood and friends feature prominently) to the history of the heavy water plants to the intoxicating qualities of Golden Glow cider.