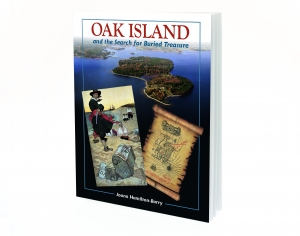 Since 1795, when a boy found a small clearing on a tiny island off Nova Scotia’s south shore and immediately became convinced that he had found the spot where Captain Kidd had buried his treasure, Oak Island has held an irresistible allure for countless treasure seekers. Through the years, numerous groups and individuals have tried, to no avail, to unlock Oak Island’s secrets. There are many different theories about who may have hidden treasure there, what exactly that treasure might be, and why they never returned to claim it. This book also shares some of the stories surrounding the legendary Oak Island Curse and looks at the tunnels and booby traps that were designed to protect this ever-elusive treasure. It is a fascinating introduction to this modern-day mystery.

The author’s passion for this topic is evident in this clearly laid-out, informative and entertaining overview of Oak Island’s colourful history. In simple, straightforward language she provides a wealth of information about the most commonly-held beliefs about the Oak Island treasure while also outlining the efforts that have been made to locate the treasure once and for all. The timeline at the back of the book and the recommended reading list are also valuable additions for young readers.