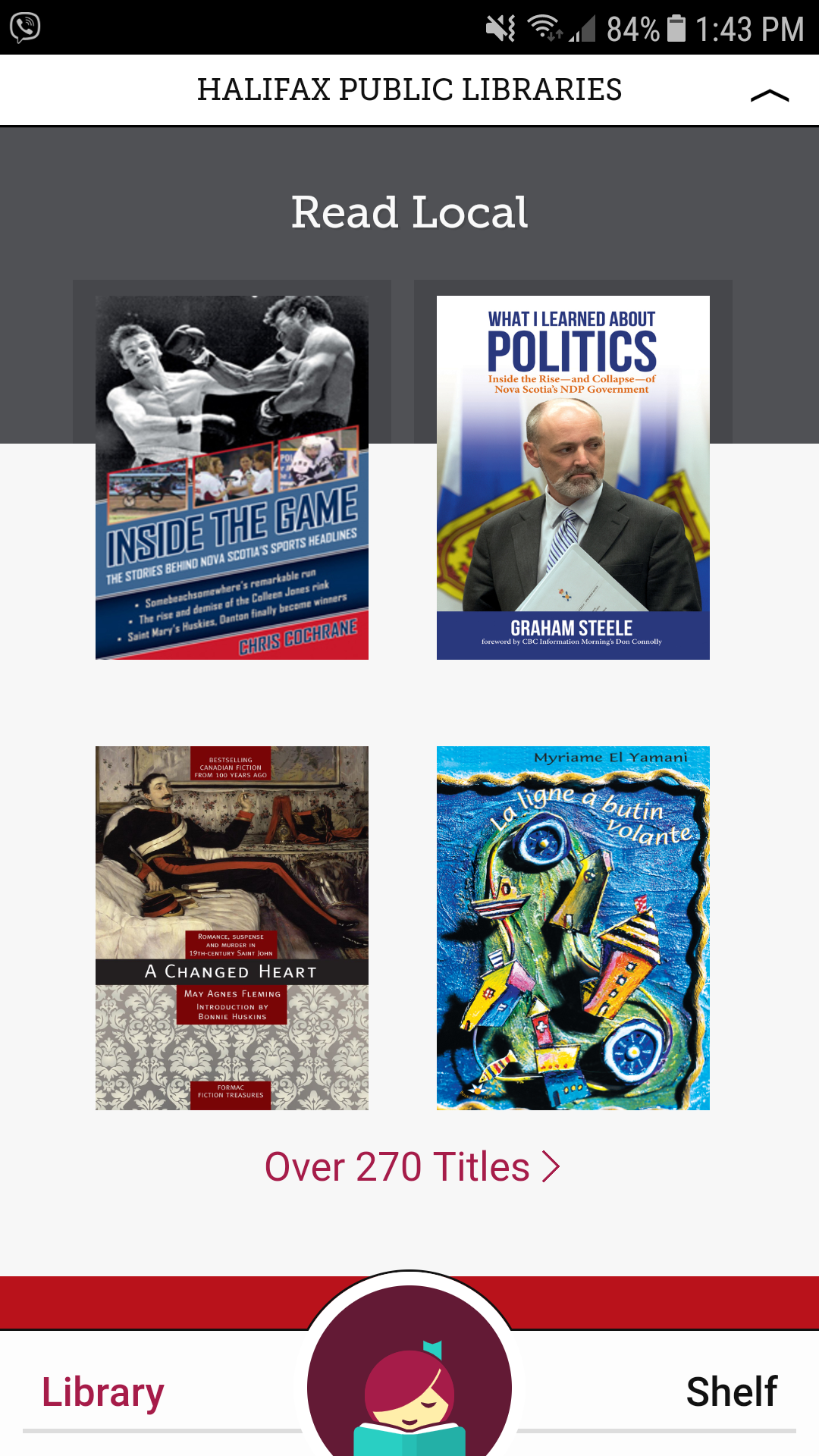 Leo McKay never expected he’d be going on a book tour in support of his novel, Twenty-Six, nine years after it came out. Released in 2003, the novel, inspired by the Westray mining disaster, was the first book selected by One Book Nova Scotia—a library promotion that aims to encourage Nova Scotians to all read the same book and discuss it.

The program saw McKay visiting libraries across the province, from Yarmouth to Sydney. “Not many people begin a career in fiction hoping to make a lot of money. What people dream of is, ‘Someone will read my book and we can have a conversation,’” McKay says. “So, from my point of view, One Book Nova Scotia was fun. It was super well-organized and well prepared, and when I’d arrive for a reading people knew who I was and what the book was about.”

Since One Book Nova Scotia launched in 2012, the province’s libraries have undertaken several other initiatives aimed at promoting books by local writers. They include a local e-book collection, a hub for digitized cookbooks by Nova Scotia writers, participation in the Atlantic publishers East Bound conference, the Canada 150 project 150 Books of Influence, and involvement in a variety of literary festivals.

When it comes to promoting local work, “We should absolutely be playing a large role in helping support and promote local authors,” says Dave MacNeil, manager of collections and access for Halifax Public Libraries. “Some local authors may not have the resources—whether monetary, time or otherwise—to self-promote. I think the public library is able to take on some of that role for them. I think we can do it fairly easily and I think we benefit from it as well.”

Promoting local books can be as simple as inviting authors to read (and sell their books onsite) and including work by writers from the region in library displays.

“Books are really our best calling card to the world,” says Laura Emery, chief librarian of the Eastern Counties Regional Library.” We’ve always purchased books by local authors—but that’s expanded into promoting titles through book clubs. And we have our own little homegrown marketing in-house…people get quite creative with local author displays.”

Beyond displays and readings, libraries have played a role in much more involved, long-term projects that are promoting writers and helping the viability of local publishing. One Book Nova Scotia is still going strong and Emery was a key contributor to 150 Books of Influence—a project to create a list of (and guide to) significant Nova Scotia books. “They are important titles that will be around for awhile and will help library staff and new users get an entry into books that are really important to our culture,” Emery says.

Normally OverDrive—the vendor providing e-book services to libraries—takes a hefty percentage of book purchase prices as a commission when libraries buy an e-book. But they’ve made an exception for local small-press books, says Dyan Bader, manager of systems and collections access for the Provincial Library. Bader was part of the team that negotiated the deal that made the collection—the first of its kind outside Quebec—possible.

“We buy e-books directly from the publishers and then we load them directly into OverDrive. So the publishers get 100 percent of the purchase price and therefore their authors get a full cut,” Bader says. MacNeil says circulation numbers have been good and that the local collection has “opened the door” to other Canadian libraries “doing this in a more widespread way.”

MacNeil, whose first job at the library was shelving books 13 years ago, is one of the people behind another e-book project—this one focused on cookbooks. Halifax Public Libraries launched Cloud Cookbooks last fall. Through the library website, users can search dozens of Atlantic Canadian cookbooks—by title, recipe, author, ingredients or other keywords.

The project came about when MacNeil was in a meeting, with Bader and Formac publisher Jim Lorimer, reviewing the success of the local e-book collection. “Jim mentioned this thing he was working on that would have lots of local cookbooks on it,” MacNeil recalls, “and that piqued my interest immediately. Fast-forward five or six months and Halifax became the first Canadian library to host and promote the Cloud Cookbooks site.”

Lorimer adds, “This is something new that creates new ways of using Canadian books. We have to be able to compete with Epicurious and the New York Times and all these other services. If we were putting up 100 miscellaneous cookbooks from anywhere, I don’t know what the response would be like. But when you tell people in Halifax they can get Craig Flinn’s recipes on the site, they know what that means.”

For her part, Emery would like to see libraries go even further in promoting access to local writers, whether published or not. She hopes Nova Scotia libraries will eventually adopt the SELF-e platform, developed by Library Journal, which allows indie writers to upload their self-published e-books. She says the platform could “help these indie authors get going until they are published in more traditional formats.”

Whether it’s through promoting online collections, making e-books more accessible, or creative displays highlighting authors and collections, Lorimer says there’s no doubt libraries play a crucial role in connecting local writers and readers. “Public libraries are a powerful source of awareness of books. The stats really show how powerful libraries are in telling people about books they don’t know about.”