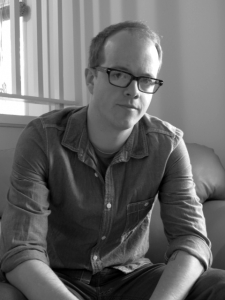 Growing up in Riverview, New Brunswick, Danny Jacobs wasn’t one of those kids writing poetry for the high school yearbook. He was more likely to spend his time reading popular science books by the likes of Stephen Hawking.

He ended up studying astrophysics at Saint Mary’s University. “I quickly realized I didn’t like sitting in labs watching pendulums and deriving formulas,” he says.

His English classes, on the other hand, captivated his imagination.

One of his professors was Halifax poet Brian Bartlett, who opened Jacobs’ mind to creative writing as a serious endeavour. “A lot of kids go into university thinking they know what they want to do but they don’t really,” he says.

Jacobs notes the debate over creative writing programs and whether they churn out young writers whose work is homogeneous, following some sort of Canlit formula. But he doesn’t see it that way. “It can be quite a beneficial place for aspiring writers.”

He was inspired enough by several good teachers at SMU that he went on to take a Master’s of Arts closer to home, at the University of New Brunswick. He dabbled in a bit of every creative writing form and settled on fiction for his thesis. But it was his poetry that seemed to find the most success.

He graduated in 2008 and a year later his poem, “How to Shoot Skeet with My Grandfather’s Lost Double Barrel,” won Grain Magazine’s national poetry contest.

“As a writer, you never know if you’re good at it,” he says. “And it’s a crap shoot with contests; the best piece doesn’t always win.”

But the win gave him the boost in confidence he needed, simply knowing that at least one judge with a literary background deemed his piece worthy of national recognition. His poems have since been published in a number of journals across Canada.

Prestigious prizes and publications build confidence, but they don’t pay the bills for long. So Jacobs headed back to school with a specific vocation in mind, this time to study Library Sciences at Dalhousie University in Halifax.

He wrote most of the poems from his first book, Songs That Remind Us of Factories, living with his wife in rural Nova Scotia. In his review of the book, George Elliott Clarke wrote that Jacobs’ “work means the arrival of a new generation of poets, intrigued by the connective and alienating aspects of electronic communication…”

That interest may link back to the popular science books he still loves reading. “I love technical writing, any kind of technical jargon,” he says. “I love the torque you can get from the technical terminology.”

He was thrilled at the chance to revisit his old Alma Mater, Saint Mary’s, as part of Brian Bartlett’s excellent reading series there. He also travelled to readings in Montreal and Ottawa, but as a full-time librarian it was hard to find writing time, let alone book-touring time.

Jacobs is now the managing librarian at the Petitcodiac Public Library, which is about a half-hour drive from his house in Riverview, sort of a suburb of Moncton. It’s a one-person library so he does a bit of everything.

Finding time to write remains a challenge. “I keep saying I should have a schedule, write a certain amount of time every day, but it’s hard to do that with the long commute and work. But sometimes you just have to get your ass in the chair and do it.” Often he spends parts of vacations writing poems.

This year, Frog Hollow Press published Jacobs’ second book, a limited edition chapbook “printed on 80 lb. Mohawk Via Vellum and Smyth-sewn into a full-colour soft cover,” according to the publisher. It’s entitled Loid – meaning a thin piece of celluloid or plastic, an imitation of a credit or debit card used by thieves.

A significant theme in Loid is suburbia, and especially suburban objects. “I’ve lately been fascinated by lawn implements,” Jacobs says. “I have a snow-blower poem; I have a weed-whacker poem.”

But don’t call that a theme. “I find writing around a theme can be constraining,” he says. “I write one poem at a time” rather than setting out to create a book of poems on a specific topic.

Lately, he has found himself revisiting prose, this time writing creative nonfiction and literary reviews. He likes having deadlines.

Jacobs is also working on a new piece for The Walrus, an essay about Alexandra Oliver, a poet who lives in Burlington Ontario. He cites Oliver along with Kayla Czaga and Richard Kelly Kemick as some of his favourite young poets in the country. “It’s intimidating how much talent is being published but it’s good for Canadian poetry,” he says.

But his praise isn’t universal. “I have reservations about some of the new poetry, which leans a bit too much on high-wire risky, experimental stuff. I like a grounded poem.”