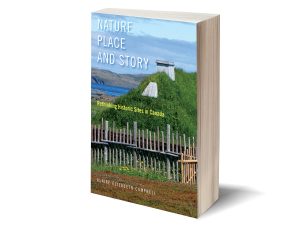 In Nature, Place and Story, environmental historian Claire Elizabeth Campbell looks at five historic sites in Canada in order to raise questions about how public displays of history intersect with the environment. The sites are all very different—a cattle ranch in Alberta, the Fork of the Red River in Winnipeg, a fur trade post in Ontario, farmland drained from marshes in Nova Scotia and a Norse settlement in Newfoundland. Together these iconic sites represent “the largest public history projects undertaken in Canada since the 1950s.”

Although Campbell’s subtitle suggests she is rethinking our approach to historic issues to tie them directly to current questions of environmental health and sustainability, her background accounts of how these sites were developed makes it clear that historic sites are constantly being rethought to reflect the political concerns of the governments of the day.

Promoted initially as the first attempt by Europeans to settle North America, L’Anse aux Meadows in northern Newfoundland morphed into another step towards establishing Canada’s claim to the Arctic islands and seaways, just at a time when global warming was opening up the Northwest Passage. Campbell finds it ironic that it was global warming a thousand years ago that allowed the Norse to push east into the new world, yet environmental change is not a feature of the site interpretation.

Nor is environment anything but a passive feature of site development for Grand Pre, Fort William, The Forks of the Red River or the Bar U Ranch; yet all these sites have been greatly impacted by environmental change. For a time in the 1990s, the environment was seen as an element in the historic site mandate, but after a time it was quietly dropped.

Apparently, historic sites have two functions: they generate revenue in underdeveloped rural areas and they reflect and sell state policies to the public. Nature, Place and Story is a rather dense academic work that raises far more questions than it answers, but in simplest terms it prompts a reader to ask about any historic site: “What do I see, what am I intended to see and how has this experience been scripted?”

For those who wish to delve further into the subject, the 74 pages of endnotes are to a great extent an annotated bibliography of readings related to the subject of environmental history and historic sites. We’ve come some ways from the day when a jingoistic appreciation of progress and nation building was all we expected from a visit to a historic site or museum.