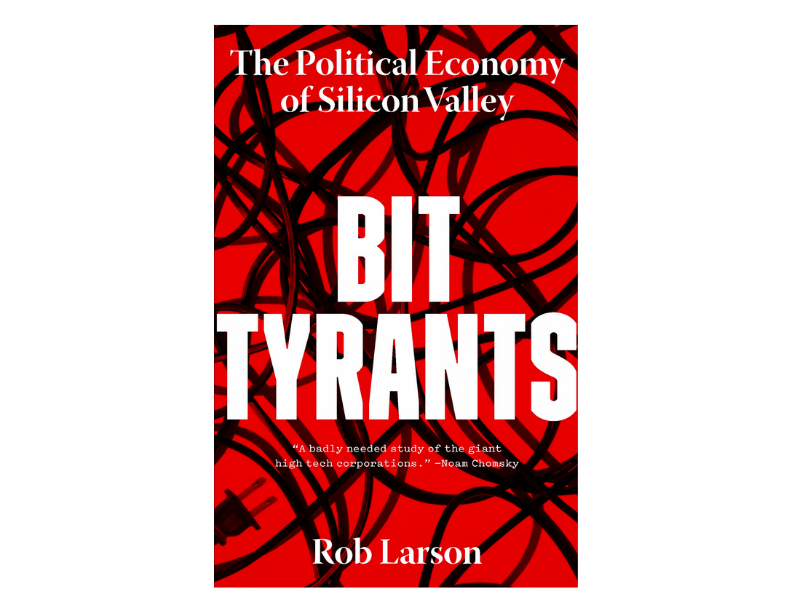 We live in a world of our own imaginations. At one time, fairytales warned of mean giants who lived in caves and valleys who would eat small children alive. While giants do not exist in the real world, large corporations that can devour our time and money in a matter of seconds do.

In Bit Tyrants: The Political Economy of Silicon Valley, Rob Larson, professor of economics at Tacoma Community College, and the author of Bleakanomics, outlines the origin story of the Big Five of Silicon Valley: Apple, Google, Microsoft, Facebook and Amazon. He provides enough research material and condemning evidence that you’d think he was preparing for a Supreme Court showdown.

The average reader may take for granted the domineering ways these giants lord over us as social consumers. Larson gives plenty of reason to open up one’s mind. He offers insight into our own willingness to mingle comfortably online, despite Big Tech’s global reputation for its hoarding of its users’ personal data.

Google is the biggest villain in the plotline. This ubiquitous search engine is a monster who has “vacuumed up user data from the start.” In 2004, when Gmail was released, consumers were shocked to learn their emails were being scanned so Google could custom brand advertising based on keywords and search history.

Larson notes that Google created only one product beyond its search engine: an email platform. Everything else, like YouTube, they acquired.

Bit Tyrant reads like a binge-worthy docu-series on Netflix or Prime, moving through our tech history from our 8bit days, in Reagan’s bleak America of the early 1980s, to our oversharing present, with web-monster ghouls like Donald Trump demonstrating how not to use social media. Larson sets the stage for Apple Computer’s plan for world dominance in its Super Bowl 1984 ad campaign, which “became famous, both for its then-innovative art design and its tagline ‘You’ll see why 1984 won’t be like 1984’ referencing of course, George Orwell’s dystopian novel Nineteen Eighty-Four.”

Larson pulls no punches in revisiting the embryonic dark days at Apple, including the February 28th, 1981 firing of 41 of the company’s 1,500 employees, when Steve Jobs told his staff, “You guys really fucked up,” after sales of the Lisa fell well below expectations. “Much as with Bill Gates, Jobs became notorious for preserving the very worst of hierarchical capitalist tyranny into the information age.”

This is one long water cooler chat about the history of everything that damns and inspires us about the high-tech, mass-culture world we all share, use, buy into and drown in.