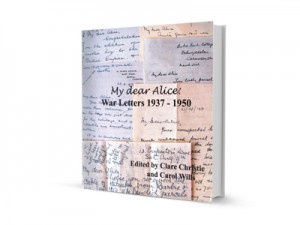 Just when one might assume the voices of those who lived with hope through the uncertainty of the Second World War have been silenced by time, a collection of carefully saved letters allows them to speak again, eloquently and with immediacy in a way that history texts can’t.

When Carol Wills of Oxford, England visited her cousin Clare Christie on Nova Scotia’s Amherst Shore in 2005 she was in for a surprise when Clare shared her mother’s bundles of war-time correspondence. The cousins discovered descriptions of people bravely making do amid air raid blackouts, threats of invasion and rationing of food and fuel as they read aloud the 70-year old letters Alice received from relatives in England and on the front lines.

Before Alice died in 1984, she attached a note to the letters, “in case anyone is interested in family letters written from England during the ’39–’45 war”. Fortunately for readers, Clare and Carol were indeed interested. Ten years later the result is a fascinating social history, which is the second in New World Publishing’s World War II Series.

The letters in My dear Alice begin by thanking Alice for the parcels she sent from Amherst which was enjoying an economic boom as a result of the war effort, and continue with intelligent observations on the war’s progress and the politics surrounding it. While the writers are all articulate, Helen Williams’ letters are particularly insightful and indicate that more was known at the time about Hitler’s treatment of Jews than is commonly believed to be the case.

The letters have all been painstakingly transcribed, and copies of some original handwritten ones, along with their envelopes (stamped with a note that censor read them, gives the volume authenticity. A timeline on each page places the letters within the context of the global conflict. Also included is a memoir by Carol’s mother, Jan Richards, written for this book, in which she concludes, “What a terrible indictment of human beings that we can inflict such injustice and pain on other human beings.”

My dear Alice is a compelling look into the the lives of ordinary people who lived with courage and compassion through one of modern history’s most extraordinary periods and a testament to the determination of their descendants to ensure they continue to have a voice.