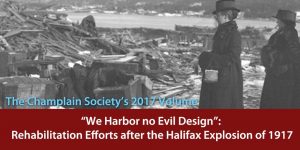 David Sutherland, formerly a professor of history at Dalhousie University, is the preeminent historian of the City of Halifax, a subject on which he has written extensively since his 1975 doctoral thesis. He was one of the triumvirate of professional historians who, in 1999, produced Halifax: The First 250 Years, which remains the only modern general history of the city.

Sutherland’s new book, published a few weeks before the centenary of the Halifax Disaster on December 6, 2017, is a documentary study of survivor pensions paid out by the Halifax Relief Commission (HRC). The commission was a federal public body, which, at the end of January 1918, took complete charge of disaster relief and rehabilitation efforts. Excepting only Blair Beed’s popular history, 1917 Halifax Explosion and American Response (1999), and Jacob Remes’s academic study, Disaster Citizenship: Survivors, Solidarity and Power in the Progressive Era (2016), “We Harbor No Evil Design” is the only work of its kind. One hopes it will not be the last. The rolling centenary of disaster relief and recovery deserves to be commemorated with the same vigour as the disaster itself has been.

As soon as the HRC was assured of adequate federal funding, it set about developing a pension scheme. The pension case files, now in the Nova Scotia Archives, run to 44 linear metres and provide a collective portrait of the surviving victims. Not every survivor, however, applied for or received a pension. Some accepted a one-off lump-sum allowance in lieu of a lifelong pension, or, if they were minors, such a payment was accepted on their behalf.

Sutherland’s methodology is not quantitative analysis. He is not interested in conventional administrative history, or in the pension system per se. His interest lies instead in the pensioners themselves. He deploys the pension files to shed light on the circumstances of individual users of the system. The organization of the book is appealing. The preface–project history, principal source material, structure and acknowledgements–is followed by a comprehensive, three-part introduction, which merits publication in its own right as a general introduction to the entire subject.

Part one of the introduction–disaster and response–deals with Halifax at war, the disaster itself, emergence of the “citizens” relief committee, formation of the Halifax Relief Commission and the HRC’s first two years. Part two deals with disaster victims and their relationships with the HRC. Part three provides an historiographic perspective and addresses the legacy of the HRC.

Sutherland succinctly describes the 400-page main body of the work as an “edited transcription of the [56] chosen case files.” His sampling technique is purposive rather than representative and the organizing principle is thematic. Four broad themes, each with its own brief introduction, speak to disaster widows and widowers, disaster-disabled adults, children of the disaster (orphans, injured, others) and people on the margins (African-Nova Scotians and First Nations, the elderly, immigrants and military families and unmarried women with children). The structure of each case-file analysis (background–transcript– summary of support–postscript) is very effective.

The illustrations–photographs, textual documents and maps–are uniformly excellent, as are the footnotes and bibliography of primary and secondary sources. A brief index of personal, corporate and geographic names includes the principal subjects of the chosen case files. A detailed chronology covering December 1917 through December 1919, as well as an alphabetical and a numerical list of the files transcribed, would have been helpful.

While Sutherland’s discussion of the Citizens Relief Committee and the Halifax Relief Commission is exemplary, it provides more context than is required. For example, all we really need to know about the ad hoc, short-lived Relief Committee is that it was soon succeeded and replaced by the HRC.

In a striking locution, Sutherland rechristens the Halifax Relief Committee, set up the very morning of the disaster, the Citizens Relief Committee. That was not its name, but that is what it was. The critically important point Sutherland is making is that the committee had nothing to do with the City of Halifax. Amidst the chaos of December 6, a committee of prominent citizens usurped municipal authority and got away with it for seven weeks until Ottawa stepped in and put a stop to such a daring exercise in lese-majesty.

Nevertheless, Sutherland’s expansive treatment of the context provides a strong “teaching moment.” For example, John DeMont’s article in the Halifax Disaster supplement of the Chronicle Herald of December 6 (for which Sutherland gave an enlightening interview) not only confuses the Halifax Relief Committee with the HRC but also makes the false claim, “In the aftermath of the Halifax Explosion a $40-million fund was established to compensate victims and rebuild the city.”

It would have been more appropriate if Sutherland’s introduction had focused primarily on the commission’s rehabilitation department, as well as on the origins and development of the pension system. The big-picture treatment is too unnecessarily big to serve the immediate purpose. Yet he is undoubtedly right that assessment of the long-term impact of the HRC “remains tentative.” The only way to “contribute to overcoming the prevailing amnesia” about the legacy of the 1917 Halifax Disaster is to restore the HRC to its central role in disaster relief, rehabilitation and reconstruction.

Anyone with an interest in any aspect of the Halifax Disaster will want to acquire this magnificently-produced book, even if it takes joining The Champlain Society to do so. It is well worth the price of a year’s membership (a digital version of the book can be purchased from the society for half the price of regular membership). It is not available in bookstores, physical or online, though in due course it will be available from secondhand or rare-book dealers, like most other Champlain Society volumes.

“We Harbor No Evil Design” is among the distinguished works emerging to commemorate the Halifax Disaster’s centenary year: December 2017-December 2018. November saw the publication of Susan Dodd’s The Halifax Explosion: The Apocalypse of Samuel H. Prince, a commentary on Prince’s Catastrophe and Social Change (1920), the first, and for long the only serious study of the disaster. Summer 2018 will see publication of the late T Joseph Scanlon’s Catastrophe: Stories and Lessons from the Halifax Explosion, a magisterial work of disaster scholarship that will undoubtedly take its place as the definitive history. On a smaller scale, but commensurate with the letter and spirit of “We Harbor No Evil Design,” is Marilyn Elliott’s forthcoming biography of her late father, a pensioner of the HRC: The Blind Mechanic: The Story of Eric Davidson, Survivor of the Halifax Explosion.

“We Harbor No Evil Design”: Rehabilitation Efforts after the Halifax Explosion of 1917
David A Sutherland
The Champlain Society

Barry Cahill’s first introduction to the Halifax Disaster was walking near the Hydrostone neighbourhood in the early 1970s and coming upon the building at the northeast corner of Young and Isleville Streets, which then housed the offices of the Halifax Relief Commission. He has since completed a scholarly history of the commission. He holds graduate degrees from Dalhousie and Oxford and is author of the official history of the Nova Scotia Barristers’ Society, which has been accepted for publication by McGill-Queen’s University Press. He is currently working on a biography of the late former chief justice of Nova Scotia, the Honourable Lorne O Clarke QC.