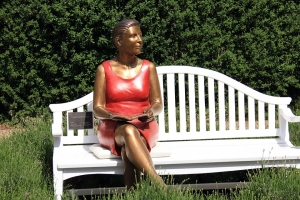 For Mother’s Day this year, rather than tell you what books we think your mom should read, we went to some literary experts – a.k.a. librarians – to see what their moms like to read.

We weren’t quite prepared for the intensity of love expressed in some of their answers, from people who miss their departed moms and others who still get to share books and their learnings with their moms many years later. Here is what we heard.

“My dear Mum, Rosemary (Hill) Lloyd, was a great reader, and she and my Dad ensured that my sister and I grew up surrounded by books. Her tastes heavily favoured British writers: she and Dad emigrated from England to Nova Scotia in 1970, and she retained a warm and unpretentious fondness for certain things English – especially a properly-made cup of tea – for the rest of her life.

“That said, my recollections of Mum do include at least one Atlantic Canadian literary thread. She remarked to me, not long after I moved to PEI in 1999, that she had never imagined, when reading Anne of Green Gables as a young girl in England, that she would one day be visiting her son on the magical island Montgomery so lovingly described. In the years that followed, Mum also developed some interest in Anne’s creator, LM Montgomery, as I shared with her some of the fascinating things I’d learned through having the good fortune to work with the wonderful community of scholars and admirers that has grown up around the LM Montgomery Institute at UPEI.

As chance would have it, Mum and I both read Mary Rubio’s imposing biography of Montgomery, The Gift of Wings, and had some enjoyable conversations around that. Though Mum was warm and sociable, with a host of good friends, she had an instinctive and deep-rooted sympathy for rebels and others who didn’t quite fit, so I think she was very interested to learn about Montgomery’s complexities and struggles.”

“When I was in primary school my mother went back to school to get her B. Ed. She had gone to Normal School in Truro many years earlier, but decided in her 40s that she wanted a university degree. While pursuing these studies she took some French literature classes where they read La Sagouine by Antonine Maillet. I can’t say for sure, but I think this must have been something of a shock to her. As an Acadienne from Cape-Breton who had married a French teacher and (eventually) relocated to Manitoba, my mother had

learned to speak a “standard” French and suppress her Acadian accent. And now here she was in a university setting, studying a novel written in that familiar and comfortable speech of her roots.

“Once the shock wore off, this was quite a treat for her. Around the same time, she took the whole family to a theatrical rendition of La Sagouine, starring the incomparable Viola Léger, which I found (being seven or eight years old at the time) dreadfully boring and largely unintelligible. Now, of course, I have a far better appreciation for the book and for the pride she felt in encountering this piece of writing that at once acknowledged the existence of her language and upbringing, and legitimized it to us, her children, as poetic and worthy of literary praise.”

“My mother, Vivian, is an avid reader … mostly of Danielle Steele and other similar authors. Recently, I’ve tried to get her into some of our local authors like Lisa Moore and Michael Crummey. She started with a collection of Newfoundland short fiction (I gave it to her for Christmas), and she liked it! But I think her preference is still romance fiction like Danielle Steele.”

“I have strong memories of my mother, Lucille, gifting and reading Toes In My Nose by Sheree Fitch with me. I have been a lifelong fan of Sheree ever since! I’m very thankful that my mother turned me into an inspired reader at a very young age through Sheree’s books.”

“My mom, Olive Smith, always liked reading Jack Fitzgerald.  Her favourites were true crime and other nonfiction works. She always marvelled at the weirdness of the world citing the maxim, ‘truth is stranger than fiction.’”

“My memory of my mother Marion Ellis’ reading is of her sitting on a small stool, in front of a heating grate, reading the newspaper and drinking a cup of coffee.  This was an end-of-the-day routine, often with my father grumbling something about night owls as he preceded her to bed. I do not recall discussing books with her, although on one occasion, perhaps at the time of the publication of Peyton Place by Grace Metalious, she commented that the previous cause célèbre was Forever Amber.”