Mister Nightingale, Returning to Newfoundland Less Impressive Than He Thought 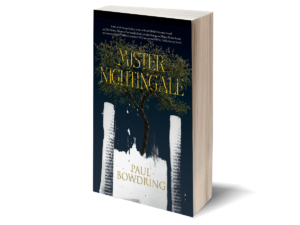 We all know James Nightingale. He’s your second-year English professor. He’s your friend’s now-ex husband who thought he was a success and made $9000 in declarable income last year. He’s the out-of-town writer hanging around the bar at last call, making no real secret of the fact he considers the rest of you third-rate because you don’t live in Toronto. Perhaps you are James Nightingale.

A middle-aged and newly divorced writer of moderate renown, James is returning home to Newfoundland for a season after 30 years in Toronto. St. John’s and his family and friends have changed – no surprises there, the publishers, friends, old haunts less impressive than they once seemed.

Even James is less impressive than he thought, failing to impress the locals as much as he’d expected with his career away, participating in a reading where nobody turns up; interviewers only want to discuss his novel about Newfoundland and they don’t even realize he’s written two. James moves through St. John’s over a summer, ruminating on his past, his family and friends, his divorce, with a large cast of characters spanning the book’s 340 pages.

But aside from the titular Mr. Nightingale, Bowdring’s most compelling character portraits fall frustratingly short. James’ friend Kevin, a failed poet who never left Newfoundland, makes cameo after cameo but his story never feels fully explained. His daughter Cecilia is a student who has abandoned the family drama in Toronto to study and seek her roots in St. John’s. Her relationship with her father is marked by a cool indifference, which James seems unperturbed by. And an old lover, Sandy, makes a brief, belated appearance, only to have the chapter – and her story – abruptly end when she cuts off James’ hope of seducing her by admitting she’s a lesbian who was closeted at the time of their romance in the 1970s.

Bowdring’s writing is full of compelling vignettes, but Mister Nightingale lacks the clear focus to hold them together. Like the people in his life, James’ future plans at the close of the book and his time in Newfoundland are only half-formed, leaving the reader grappling for more definition.