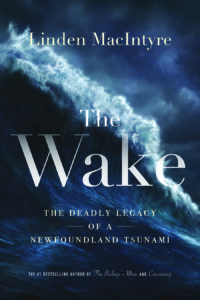 The Wake – The Deadly Legacy of a Tsunami
Linden MacIntyre
HarperCollins

Somewhere back around 1990, I first watched Linden MacIntyre do his impressive investigative reporter routine on CBC’s Fifth Estate. I was impressed by a man willing to dig deep and to get to the truth of a difficult story. The digging part might be because mining is in his family: his father was a miner. His latest book, The Wake, reaches back into the fluorspar mining history of a small remote town on Newfoundland’s Burin Peninsula—St. Lawrence. And it’s a disturbingly gruesome tale of poverty, political neglect, brutal working conditions and death.

For any book I read, I try hard to find some kind of personal connection to the story. So, okay, this is a book about mining. Connection one: When I was in grade seven, I took some kind of aptitude test and the guidance counsellor told me that I should one day become a miner. This had something to do with the fact I collected rocks. (Thank God, I didn’t go that route.) Connection two: The baddest of the bad guys in Linden’s book of woe, Walter Siebert, is from New Jersey. And so am I, but I hope no one will hold that against me. Connection three: The book begins with the story of the 1929 Atlantic tsunami, and I love anything to do with waves—even big destructive ones.

Surely, the way to read any book is to allow the author to put the reader in the middle of the action. So there I was, watching the townsfolk being swept out to sea in a Newfoundland outport on November 18, 1929, finding myself grieving for my family and friends lost in that tragedy. What followed was loss of a livelihood—the fish just disappeared after the disaster. Before long, the promise of full-time work was offered and I was, as my guidance counsellor suggested, down in the mines trying to make a scant income to keep my family alive.

Fluorspar mining was rotten work. And no one was around to protect the miners or insure their health. The work was dirty and physically devastating, and it eventually killed you and your colleagues. The man from New Jersey, the entrepreneur Siebert, was to blame and so was the weak Newfoundland government of the time.

Linden MacIntyre takes it all personally—partly because of his father’s connection to the place. Yet he also does his darndest to explain exactly how it all happened and how all the pieces fit together. Most of us know little about the history of the Burin Peninsula but now, this dark chapter is out there by one of Canada’s finest investigative reporters.