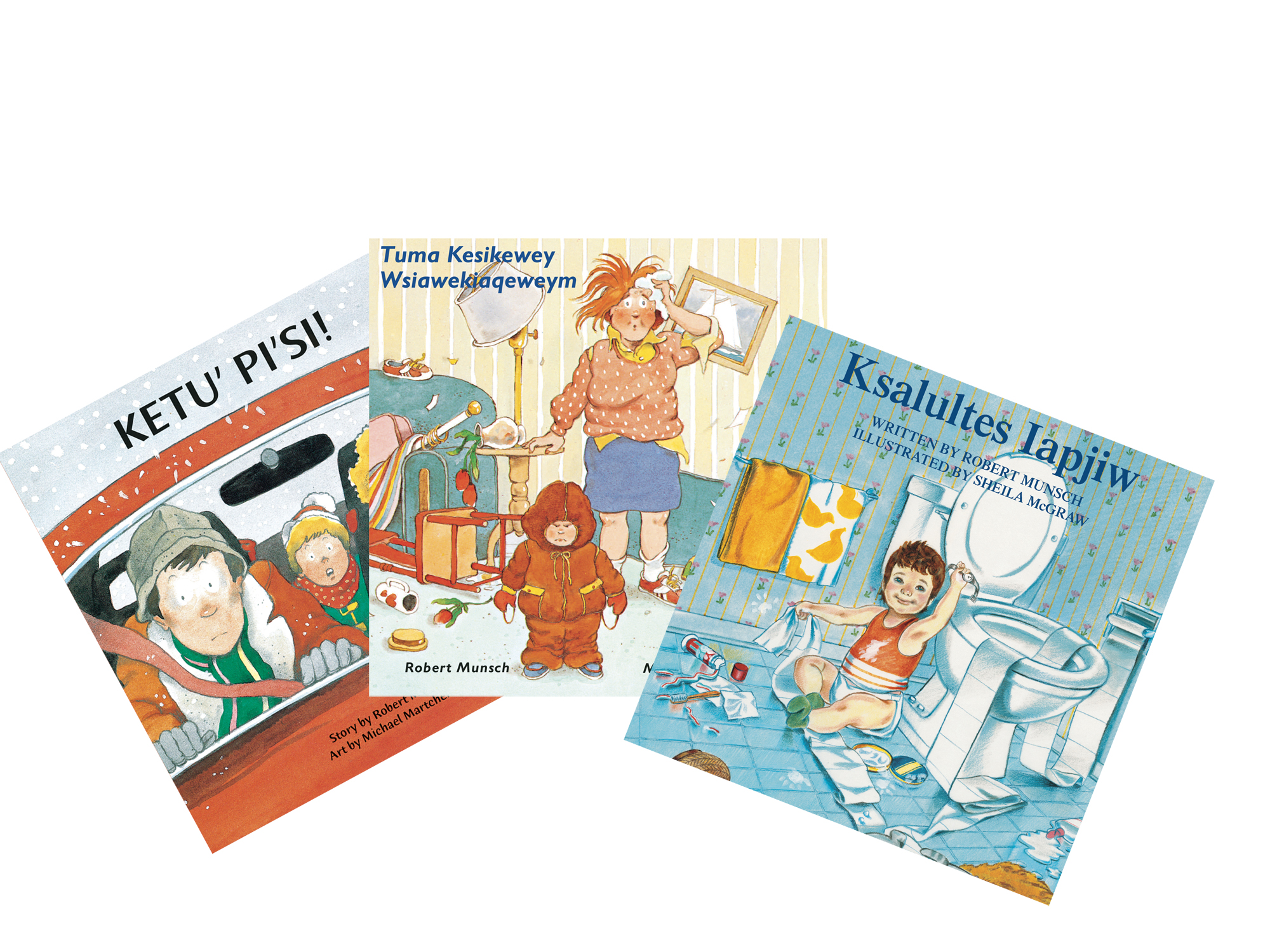 A grandmother tucks a child into bed and sings a song from a book with a tune she creates herself. The words are by Robert Munsch. “Ksalultes iapjiw, ta’n teli-pkitawsi. Ksalultes iapjiw, nijanites ki’l” she sings, her voice warbling sweetly. The child feels loved.

The book is Ksalultes Lapjiw. You may know it as Love You Forever, one of the most popular among Munsch’s dozens of children’s books. It’s one of seven that were recently translated into Mi’kmaw by MK, or Mi’kmaw Kina’matnewey, the organization that has coordinated the Mi’kmaw education system in Nova Scotia since 1997.

MK was founded three decades after the closure of the disastrous Shubenacadie Indian Residential School as the provincial education system continued to fail Mi’kmaw students. It put the power for Mi’kmaw education in the hands of the Mi’kmaq and encourages the education and employment of Mi’kmaw teachers. This way, students can grow up understanding their own culture and speaking their own language, opportunities that were often denied to their parents and grandparents.

An essential component in this effort is language immersion. But MK struggles to find enough teaching resources in Mi’kmaw. “In 2010, the school principals asked us to look for everyday books in Mi’kmaw,” Janice Ciavaglia, MK’s literacy specialist, recalls.

There were several Mi’kmaw books but they weren’t the ones most Canadian children would know. While it’s important to encourage original and traditional Mi’kmaw stories, the teachers also wanted fun, familiar material to get kids excited about reading their language.

Ciavaglia and her colleague, Blair Gould, cast their memories back to their childhoods and thought of Munsch. His frenetic, kid-centric stories have helped raise millions of Canadians since 1979.

He’d visited one of their Cape Breton schools. At the time he was making 50 appearances a year, meeting kids and sharing stories with them, creating them orally and refining them with repeated telling. Even the Elders were fans of Munsch. “We went on his website and asked if he’d be willing to let us translate his books,” Ciavaglia says.

The translators hit some snags in the process. Munsch’s Angela’s Airplane was to be one of the translated books but there is no Mi’kmaw word for airplane. Another Munsch classic, I Have to Go, was translated into the more literal I Have to Go Pee in order to make sense in Mi’kmaw.

But in other ways, the excitable children and adults in Munsch’s stories were a natural fit for the Mi’kmaw language, which is dynamic, action-based, heavy on the verbs and based on interrelationships between people, animals and things. “He uses a lot of moving words and his noise words [VAROOMMM] work well,” Ciavaglia says. “His words are super dynamic and we like that he’s a Canadian author.”

In all, MK translated seven books including I’m So Embarrassed, Andrew’s Loose Tooth, Thomas’ Snowsuit, A Promise is a Promise, Mud Puddle, I Have To Go and Love You Forever. MK worked with Eastern Woodlands Publishing in Truro to produce 1,000 copies of each book, half for schools and libraries and the other half to sell. “A Munsch book is now a staple present in the Mi’kmaw community.”

MK also produced a teacher-lesson plan to accompany the texts. The books and lesson plans have been in use since the start of the school year.

Ciavaglia and Gould had hoped Munsch could come for the launch but “he had had a stroke and couldn’t join us,” Ciavaglia says. Since his stroke in 2008, Munsch has significantly cut down on public appearances. Ciavaglia thinks he’d be pleased at the reception from all over the world, including from a similar immersion program for Maori students in New Zealand. “We had to hire somebody just to ship out all the orders.”

The most important reaction comes from home. Elders are happy to read the stories and children are thrilled to listen to the cadence and humour of their own language. The jokes are even funnier in Mi’kmaw. “And the kids are super proud to hear Mi’kmaw in the public library and other places where it’s not normally spoken,” Ciavaglia says.