Songs of immigration and mental health 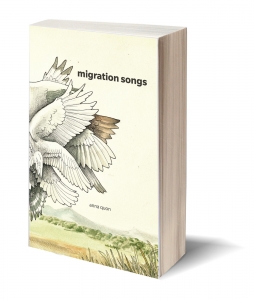 Anna Quon’s debut novel Migration Songs tackles two weighty subjects rarely touched in Atlantic Canadian literature: the hidden lives of immigrants and the lonely isolation of mental illness, and she steps up to the challenge with grace and sensitivity.

Joan is a jobless 30-year-old loner, who pacifies her clinging anxiety by sucking on cough drops. Protected like lions by her parents, a therapist and Edna, a matronly Hungarian neighbour, Joan struggles to understand her place in the world, and the people around her. When Joan recalls how her parents met—her British father, David, is a staunch Mao supporter, and her mother Gillian, is a Chinese Canadian immigrant who became pregnant weeks after David spotted her in London’s Hyde Park—the story arrives well-worn and rehearsed; a tale that Joan says, “gripped me, overshadowing my own.” A large chunk of Migration Songs is dedicated to David and Gillian’s history: Perhaps Quon sees this as the fate of immigrant children—to forever be in the shadow of their parents. Though Joan says she was never bothered being a “sideshow, an afterthought. But something calls to me from the future—a bird sound, like that of geese in flight…”

Unlike Dionne Brand’s What We All Long For, a panoramic look at young second-generation Canadians living in downtown Toronto, Quon’s Halifax is a nondescript blur. Joan has created such a small life for herself she doesn’t seem to notice her surroundings. It’s an intimate place—in part because of Quon’s use of the present tense, first person—and there’s a real sense of privilege that, as readers, we’re allowed in, especially as Joan discovers troubling secrets about the people she most trusts.

There are moments when Quon’s confident writing flies beyond expectations of a first-time novelist. A sound of applause is “rain on the surface of the water” and unhappiness “bloomed like a dark, night-loving flower.” Migration Songs also showcases the continuing maturity of Invisible Publishing, and the importance of having a regional publisher dedicated to giving a voice to the quiet and often forgotten among us.