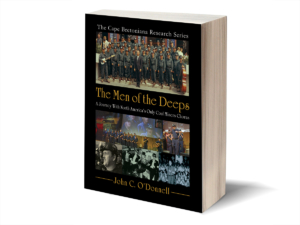 John C. O’Donnell is the long-serving musical director of North America’s only coal miners choir, and The Men of the Deeps: A Journey With North America’s Only Coal Miners Chorus, is his contribution to a published history of the group that includes Diamonds in the Rough and The Men of the Deeps—The Continuing Saga, both by Allister MacGillivray. MacGillivray’s pedigree is that of songwriter and folk music enthusiast. O’Donnell does him one better with his personal connection to the choir over forty years of its fifty-year history.

O’Donnell’s book is amply illustrated with photos, newspaper clippings, and other reproduced ephemera, and though it follows the choir through the ups and downs of five decades, it’s an easy afternoon read. O’Donnell’s love of and pride in the choir is evident on every page, as he writes with awe of the reception The Men received everywhere from Communist China to the Juno Awards to Front Page Challenge, to Jeopardy.

This is a chronological telling of The Men of the Deeps story, and as such it lacks the drama a more nuanced narrative might offer. And though O’Donnell was there for most of the events he describes, his style is formal and a little removed, so the reader doesn’t really get the sense of being along for the ride. In fact, the sparkliest writing is supplied by Silver Donald Cameron, who accompanied the choir on its inaugural trip to China in the 1970s, eventually producing a series of four stories on the tour for Weekend Magazine. Parts of Cameron’s writing are reproduced here, and they are lively and give a good sense of what that groundbreaking three-week tour was like for The Men of the Deeps and the Chinese citizens who encountered the choir. O’Donnell occasionally falls prey to the pitfalls that await authors of local history. Meticulous naming of community members who helped the choir along the way and too much time spent on the intricacies of government funding available for the undertakings of the choir or denied it, sometimes bog the story down in the kind of bureaucratic details of interest to those backstage, but not those sitting in the audience.

Still, this book offers much to those who are interested in the history of Cape Breton itself, the coal mining industry, or who are already fans. Especially of note are the extensive appendices, with comprehensive lists of touring activity and festivals, repertoire and a full discography, along with complete introductions to the individuals who make up the chorus today and names of past personnel.

These additions, along with the variety of photos and illustrations, make this fiftieth-anniversary-marking book a valuable resource.

The Men of the Deeps
by John C. O’Donnell
Cape Breton University Press