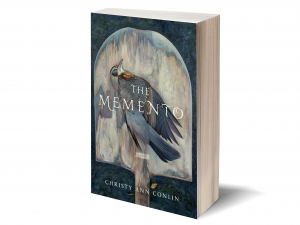 Christy Ann Conlin’s second novel, The Memento, takes place in the great manor and estate of Petal’s End, in the convincingly detailed Lupin Cove, Nova Scotia. Here, the lives of members of the wealthy Parker family have for generations intertwined with those of their servants, including the Moshers.

The work combines breathtaking writing with the chill of a genuinely frightening ghost story, which follows Fancy Mosher as she grows up, learns suffering and comes to understand that we can only find peace with our losses through truth.

The story is, however, somewhat challenged by pacing. The bulk of the novel meticulously details life at Petal’s End, before speeding through Fancy’s complicated adolescence and young adulthood. It is during the closing chapters that we fully come to understand the intricate connections between the Moshers and Parkers.

The characters seem to be pulled from different centuries, even while occupying the same space: the Parkers are remarkably Victorian compared to the drink-addled and edgy modern staff.

Despite this incongruity, Conlin weaves together fascinating characters and excels at portraying knotted family ties, such as Fancy’s convoluted relationship with her mother. These protagonists, and the beauty of Conlin’s language, are compelling.