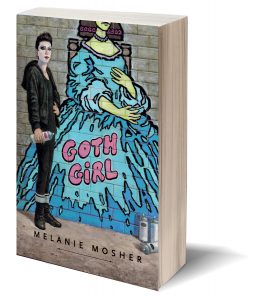 When Victoria Markham is caught making graffiti she finds herself assigned to community service in the form of a program called the Community Art Project. She and her fellow group members have to design and create a mural for a local construction site.

While she initially resents the idea of having to work with this ragtag group, she soon gets caught up in the project in spite of herself. She also finds herself falling for Zach with his good looks and bad boy charm. When Zach seems to be falling for her too, she can’t believe that he actually likes her goth girl look, and yet still sees the person she is beneath all the makeup. Which is more than she can say about her own mother, who doesn’t seem to see Vic at all, or to like what she does see.

Vic discovers that her mother has been lying to her about something very important: her father, who is sick and wants to meet her. Vic’s world starts to feel very out of control as she tries to be true to herself in the face of these numerous life-changing events.

Mosher’s debut novel for young adults features several themes that will resonate with her teen audience. She realistically portrays the emotionally-charged relationship between Vic and her mother, the ongoing tension between them and Vic’s feelings of being invisible to her mother and of somehow never being able to please her. She also calls attention to the fact that just as Vic resents being judged by others based on her appearance, she too needs to be conscious of doing the same thing to those around her (as when she realizes there is more to her fellow group members than she originally imagined).

While Vic also comes to some painful realizations about Zach, readers may wish that the development of their relationship could have been more fully explored, along with some of the other weighty isssues that the book tackles in its 160 pages. Nevertheless, the messages that it conveys are relevant and meaningful to comtemporary teens.