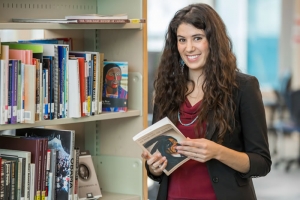 Halifax Regional Municipality has announced that its sixth poet laureate will be Rebecca Thomas, a spoken word artist and Halifax Slam Master. Thomas is also coordinator of Aboriginal Student Services at Nova Scotia Community College. She will embark on a two-year term as poet laureate starting April 1 and taking over from El Jones. Thomas graciously took the time to answer a few questions about her new role, and even shared some verse:

Congratulations on being selected as HRM’s new Poet Laureate. How does it feel to follow in the footsteps of the five previous Poet Laureates, particularly your immediate predecessor, your fellow spoken word artist El Jones?

I have so much respect for El Jones. She is a formidable woman and beautiful artist. The way she speaks about Black issues and people only fortifies my feelings and beliefs about being a strong voice for Indigenous people. I am Mi’kmaq, L’nu, and proud of that. Following all these strong poets makes my role and goals a little clearer. They were strong voices for their communities and so will I be.

What are some of your main goals for your two-year term?

I would very much like to grow the slam poetry scene here in the city. We have beautiful poets and talented artists here but we don’t always have a place to perform. I run my slams, Andre Fenton runs his youth slam, Martha Mutale and Matt Burt have Poetry for Progress but it can be so disconnected. I’d love to see a regular venue with a regular crowd and regular poets who can practice and grow as artists and writers. Finding space that is affordable is a challenge.

I also have other goals that are more focused on Indigenous issues. I’d love to see [the name of] Cornwallis Street changed to something else. I know this is a contentious topic. Yes, I recognize that he founded Halifax. I’m not saying we should wipe him from our history books but I don’t think he should be honoured. There is a very big difference between remembering someone and honouring them. Someone who put a bounty on our scalps, a proclamation that still exists on our books, shouldn’t be honoured. Whether or not a poet has that kind of power has yet to be determined.

In this position you are the official literary ambassador for Halifax. As a Mi’kmaw woman, you also bring a different cultural perspective than those held by previous Poet Laureates. How significant is it that an Indigenous person hold this position?

I think the time is right for an Indigenous Poet Laureate. The Truth and Reconciliation Commission just wrapped, Canada has signed on to the UN’s declaration of Indigenous Rights and Freedoms, a National

Inquiry into Missing and Murdered Indigenous Women is underway and various other Indigenous issues are taking centre stage in the Canadian spotlight. There is still a lot of racism that exists in Canada towards us. People are mistaken if they think Canada doesn’t have a race issue. Simple things like the fact that I have to carry a card to prove my ethnicity is proof of that.

Now all that being said, I hope to start a conversation and not spark a series of defensive responses as to why it is the way it is. We are people who deserve to be treated with dignity and respect. I hope people ask me questions. I want to sit down and talk and listen and hear what people have to say. I hope that with the position, people will grant me the same level of respect and listen when I speak and not just wait for their turn to talk.

You’ve also been quite active in getting youth more engaged in poetry, harnessing its power so to speak. How will this particular passion impact your work over the next two years?

I’ve worked with youth for a long time; not just in poetry. I’ve been a camp counsellor at the Mi’kmaq Native Friendship Centre, I used to work for the town of Riverview when I was in University and I worked for the YMCA as a “tween” worker.

I think that the world doesn’t give enough credit or validity to the feelings and perspectives of young people. People are quick to label it as a phase or dismiss something as unimportant. Look at the amount of pressure that the world puts on young people: young women must be physically perfect, demure, attractive, virginal but still “fun,” be good in school, popular, attentive etc and young men must be tough, man up, be an all star, don’t show their feelings or else they’re labelled. Look how that leads to really messed up expectations of how to treat women and how young women put up with mistreatment.

Not only are they trying to figure out how to be an adult, they are also being ingrained with really terrible social “norms.” If a kid doesn’t measure up to all these expectations (and who could?) imagine the sense of isolation and failure they must feel. Now add another layer of being a person of colour, being a religious minority, LGTBQ, immigrant etc onto that and you’ve got a tremendous amount of stuff to navigate. The Youth Slams gives a space where these kids can work through some of this stuff and feel like they are important and that they matter.

If I can use this role to make a handful of kids feel like they matter and are important than it was well worth it.

Any chance you’d be willing to share a verse or two with our readers?

This other excerpt is from a poem called “Just Another Native Poet.” It shows my more political side of things. When I said I would speak up, I meant it:

History’s voice is colour coded
By those who have always had the right to vote for it.
Do you know what it’s like to only see yourself appropriated?
To see Karlie Kloss wearing a headdress on the runway half naked?
Being told that spray painted racial slurs on homes in Nova Scotia are isolated?
Your ignorance is showing if you think colonialism is over and outdated
By the egregious fact that I need a government issued card that proves that I’m Native.
A card requiring birth certificates, photographs, and guarantors to be validated.
A card that expires every ten years.
Point me to a colonizer whose ethnicity can be held in arrears.
I would like to read the federal White Act.
I’d like to see your equivalent to e-tags and a rez pass.
Maybe live in a city that was founded by a man who put a bounty on your scalps?
On the corner of Cornwallis Street is where our Friendship Centre is housed.
Did you ever stop and think why we are called Redskins?
It’s because we’ve rubbed ourselves raw trying to scrub off the “dirty Indian”
Trudeau is great and all but statistically I am still five times more likely to go missing.
Justin, that Haida tattoo is cute but you’ve got to sit down and listen.
It’s time to get this country in a treaty condition.
You can all suck your teeth and roll your eyes but I’m simply not ready to diversify my writing to go with it.
Because I’m am proud to be pigeonholed as a Native Poet.