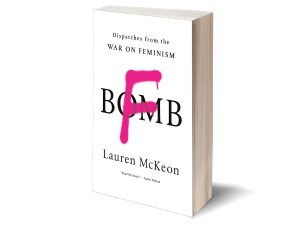 Pioneering Canadian author Jane Rule (1931-2007) noted that she was enraged after discovering the long reach of patriarchy as it was delineated in Sexual Politics (1970), the bestselling book by Kate Millet, who died in September.

“I date my awakening to…the reading of [the volume],” Rule wrote in her essay “Before and After Sexual Politics.” “By the time I had finished… furious with the misogyny it revealed, I had come to know that…moral and political evaluations of literature were…important to everyone.”

Published in A Hot-Eyed Moderate (1985), Rule’s sentiments will likely resonate with readers of F-Bomb: Dispatches from the War on Feminism by Lauren McKeon. In the opening pages of her book, the thirty-something Toronto writer speaks directly to women “who believe we are in a post-feminist world.”

“I want nothing more than for all the women who have dedicated their lives to feminism to retire and sip pina coladas on the beach while women and girls everywhere enjoy the fruits of their labor,” McKeon writes. “Equal pay, lives free of violence, equal representation in positions of political power, absolute reproductive rights, harassment-free working environments, and about a bazillion other things. But I just don’t see that paradise yet.”

Indeed, making excellent use of research from an array of respected government, political, educational and cultural organizations, the author details the growing backlash against equity for women in North America. But far from a dry statistical tract, McKeon includes her insights as an astute observer and proponent of social media.

She concedes that antipathy toward women’s liberation is “nothing especially new.” Works ranging from Lysistrata by Aristophanes to Scum Manifesto by Valerie Solanas (the woman who shot Andy Warhol) deliver powerful takes on the subject. However, McKeon asserts that the Internet has enabled anti-feminist forces to re-emerge “wilder and…everywhere.”

Think: “Grab them by the pussy.”

“This new pukey-face-emoji reaction to feminism may have historical roots, but it also has contemporary reasons,” McKeon writes. “I’ve never before seen such a blanket rejection of feminism from those who actually have a vested interest in seeing it achieve its goals. …I can’t credibly claim they are all misogynists, and too many of them are not traditional, right wing. …I also can’t quite convince myself they are all under the big, fat, hairy thumb of men.  …And yet…they repeat the same strange rhetoric of many anti-feminists: they…believe in equal rights, but feel feminism limits and confines them.”

In absorbing passages that evoke the seduction and subterfuge found in spy thrillers, McKeon chronicles her encounters with female leaders of men’s rights groups. Consider Ontario resident Janet Bloomfield (a pseudonym), creator of a popular website—JudgyBitch—that promotes “men power” with click-baiting headlines such as “Why are feminist women so fucking pathetic?” and “The world’s most retarded feminist: I have found her.”

“While she admits her shouty tone may be too over the top for some readers, her hope is that JudgyBitch provides a portal into the diverse world of anti-feminism,” McKeon writes about Bloomfield, who holds an MBA from a major Canadian university. “She’s a smart, savvy woman who has overcome terrible things in her life, but whose smartness, savviness and tenacity have convinced her that feminism is no longer relevant for women. …Bloomfield also knows how to play the attention game against feminism, and win.”

McKeon juxtaposes a growing trend to defend “men falsely accused of rape” against her experiences, at age 16, as a survivor of sexual assault. She notes that dozens of groups such as the US-based Save Our Sons “have sprouted up like weeds to combat the push for rape survivors’ rights, and they’re not losing.”

“They argue that feminists use…gender bias against men and create the perfect revenge model for scorned women,” she writes. “In other words: Those lying, crazy feminists blow things out of proportion.”

Reflecting on her assault in today’s political climate, McKeon wonders: “Would I have been convinced I just made bad choices? That it wasn’t rape at all?”

A sobering but vital read.