Math is all you need: Halifax author uses math to solve music mystery 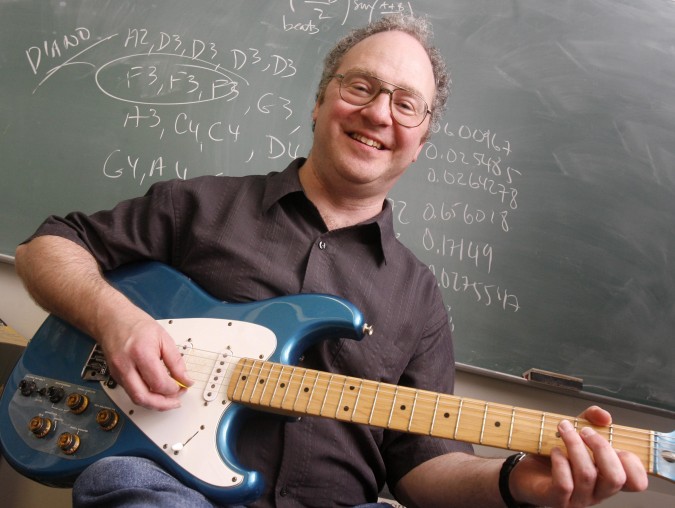 Author Jason Brown reveals how numbers are connected to everyday life in Our Days Are Numbered: How Mathematics Orders Our Lives

“I wanted to promote the idea that mathematics is for everybody,” says Brown, a professor at Dalhousie University’s department of mathematics and statistics since 1994 (a specialist in graph theory and lover of networks—introductions to which you find in his new book). “It can benefit everyone.”

His belief remains steadfast, even as his interviewer shares painful memories of elementary, but especially high school, mathematics teachers, abandoning him and other strugglers and stragglers, while showering praise on the chosen ones in either-you-get-it-or-you-don’t zeal. Both early on in the book and in conversation, the author and teacher identifies this as a “quasi-religious” approach that has done more harm than good over time, a point he makes in the book too.

“It’s not difficult to teach to the top two per cent [of a class],” Brown says. He refers in the book to troubling conversations he’s had with teachers currently working in the school system.

In his writing, Brown directly addresses all ranks of that leftover 98 per cent. “Everyone deserves to learn these things,” he says.

Each set of Brown’s problems and solutions builds on the last – cumulatively. In conversation, he suggests this cumulative learning is unique to math; that “in history or English you can miss a part or a book and not get behind.” Of course, this is debatable, considering, for example, the influence of immigrant communities on the two European solitudes of CanLit to the transformation of Canada’s military role in international conflict.

Using dry wit to gentle humour, storytelling (drawing on entertaining scenes from his life with his wife and two sons), knowledge of pop culture, daily news and current social issues and concerns—all told, a grounding in the here and now—Brown engages all readers to stick with him, even those who may not ever share his enthusiasm for the mathematical content and must constantly flip back and forth (though he includes chapter and page references to make that easier). One is constantly reminded of the person behind these pages, showing his work.

The book’s structure, he continues, unfolds as “a walk through a day in my life – not in the life,” Brown says, with a chuckle.

The reference is to a song, “A Day in the Life,” by Brown’s favourite band, The Beatles. The professor continues to gain international acclaim and trigger debate over his mathematical analysis of the Fab Four’s music, going back to his original work decoding George Harrison’s opening chord in “A Hard Day’s Night.” The idea to write Our Days Are Numbered, Brown says, grew out of that research.

Within the book’s structure, which cuts between anecdotes of daily life and mathematical problems arising from the everyday, Brown devotes a chapter to music, particularly that of The Beatles, in chapter twelve, “Sex, Math and Rock and Roll.” This is where he sets out to prove how our brains are “hard-wired” to operate mathematically when listening to music.

“There’s a unique aspect to The Beatles: unlike so many bands from that era, their music is still cool,” says Brown, a musician himself, adding, “The [Rolling] Stones’ music doesn’t warrant this.”

Of course, this claim is a mix of personal preference and professional discipline. Brown makes a value judgment (part of what goes into what mathematicians call “utility function,” discussed in Chapter Six, “Chance, Decisions and the Fear Factor”) about The Beatles’ music being worthy because it bears his own profession’s analysis.

But one wonders: is a certain type of music, or, for that matter, any other decision or solution to a problem (he examines everything from home decorating and renovations to figuring out food labels) more worthy because it can be rendered mathematically? This is a question going to the very premise of Our Days Are Numbered. Whether Brown’s convincing in his argument depends on the reader.

The Beatles warrant more consideration because it satisfies a mathematical curiosity along with being an individual choice for Brown. But there’s just as much value in looking at the cumulative progress of rock history.

An avid music fan, who’s closely read music journalism and literature over the years, and not spent time applying math to rock and roll, would know that the Stones were considered the darker, more dangerous version of The Beatles when both first emerged in the ’60s and for the Stones, the reputation stuck with them for a long time.

How does one convey, explain or measure that sense of danger? Can a solution or proof—an absolute statement on the nature of its creation—be found and explained to others?

The point is about choice: some may choose other analytical sources of thought (history, literature and visual art, including work that doesn’t necessarily adhere to mathematical rules or principles, as Brown discusses in chapter eleven, “Nature, Art and Fractals”) over math in understanding the world and engaging in argument or discourse.

Brown acknowledges the validity of such choices, saying the mathematician must accept other approaches and that “everyone has their own values.” But, adds Brown, “I can’t help but see mathematics everywhere.”

Sean Flinn is a freelance journalist in Halifax, Nova Scotia.