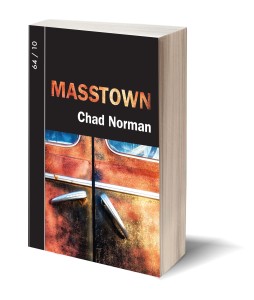 Written as a tribute to his grandparents, Bert and Gladys, Chad Norman’s Masstown explores life on a dairy farm a half-century ago, when a haircut in the farmhouse kitchen felt like a baptism; when a father’s knees were worn down by his 11 children.

Distilled in each poem is the necessity for upholding tradition, and a sense of great loss—both of a way of life, and of the ones who lived it. Bert and Gladys exist in their subtleties: the reflection of a match flame in Bert’s glasses; Gladys’s near-religious halving of her daily lemon.

Largely descriptive and narrative, the poems seem the salvaging of a photographic memory, often focusing on a singular task or image—so it isn’t surprising that an entire section is devoted to “portraits,” in which Norman breathes life into a moment literally captured in time, turning something inherently static into something forever alive.

Whitney Moran is an editor, journalist and poet who lives and writes in Halifax. Find her at whitneymoran.ca.