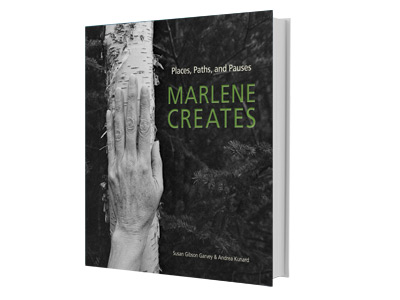 Any artist’s career, considered over enough time, can resemble a journey with an internal, retrospective logic that makes it seem as if their destination had been predetermined. “Here I am,” we think we hear, “and this is how I got here.” The retrospective exhibition, with its traditional chronological path from the earliest to the latest work usually reinforces that impression. The reality is that few artists know where they’re heading when they start out on their journeys. They follow the work, often stumbling in the dark, with the prospect of failure their constant companion. Their paths meander, double back, run into dead ends. They discover unexpected vistas. But in the retrospective exhibition (or the book that accompanies it), we rarely see the failures, concentrating, as I suppose they must, on the vistas opened up by the artist’s successes.

This is certainly the case in the new book on the work of Newfoundland artist Marlene Creates. Self-described as an “environmental artist and poet,” Creates works across disciplines, comprising elements of sculpture, performance, written word and video, though the majority of her work is photo-based. Since the late 1970s, Creates has been working in the environment, making ephemeral gestures in the landscape documented with her beautiful photographs in places across Canada and the United Kingdom. Always, it seems, circling around and towards Newfoundland, where she has family roots, and which she has made her home since 1985.

The five contributors to Marlene Creates: Places, Paths and Pauses each deal with varying aspects of her career, building a picture of the broad scope of her work. The editors and co-curators of the accompanying exhibition, Susan Gibson Garvey and Andrea Kunard, bookend the publication with thoughtful essays that look at the overall practice of Creates, each from their own perspectives. In between are contributions from British writer Robert MacFarlane, Governor General’s Award-winning poet Don McKay and art historian Joan M Schwartz.

The artist herself is a constant voice in the publication, providing short introductory statements to each of the many selections of images documenting various bodies of her work. Divided into five sections, there are 20 bodies of work covered in the book. This is not exhaustive, by any means, but it represents the majority of her projects, and, one must assume, the way she wants her career to be described. Such publications, with their mission to present as much as possible about their subject, can run the risk of exhausting the reader. Marlene Creates evades that pitfall through a combination of skillful design, a well-balanced selection of texts and the sheer visual richness offered by the numerous illustrations. The balance between installation shots, details, full-bleed images and double-page spreads keeps one’s eyes active and engaged. The spare, conversational, texts contributed by the artist function like the pauses of the book’s title, providing short breathing spaces before we fully engage, again, in our journey along the artist’s path.

Newfoundland, specifically her six acres of boreal forest on Blast Hole Road in Portugal Cove, has been, since 2002, the primary subject matter of Creates’ work. Of the seven projects documented here, three are listed as “ongoing.” One, the Boreal Poetry Garden, actually has multiple projects, comprising poetry and performance, walks in the acreage and an online component. Clearly, this volume documents a journey that has by no means ended, although it has tightened its focus to a small patch of land on the Avalon peninsula of Newfoundland.

As Creates wrote about some of her earliest work, “nature is never finished.” This is the sort of book that will repay repeat reading and most especially repeat viewing of the unique images that comprise its bulk.

Retrospectives may be guilty of suggesting more order to a particular journey than may have really been there. But with its retrospective depth of vision, this work allows the reader to retrace the artist’s steps, or, at least, a version of them.

The exhibition opened at Fredericton’s Beaverbrook Art Gallery this September and will tour across Canada through 2020.