A map of Halifax in the 1950s by George Elliott Clarke 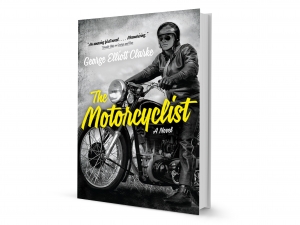 This titular motorcyclist is Carl, who is based on the journals the author’s father kept as a young man. Carl is veritable bursting with energy, desire and lust, and it’s all trapped inside him. He is limited by societal prejudice, the oppression of Black people and by his Grade 10 education, even though he is articulate, artistic and offers an astute political analysis.

As he searches for his One Great Love through relentless trial and error, he falls evermore deeply in love with his R69 BMW motorbike. Our hero reads beat writers and dreams of the road, but mostly traverses within a four-kilometer radius between his north-end apartment and low-wage job at the train station.

Constant in his mind is the contrast between his own position in society, his need to be loved an respected and his craving to be a free independent man.

The Motorcyclist is a novel of Halifax in the Jim Crow era and shows the clearest of colour lines as it maps the city and its late 1950s landmarks. Yet, the issues Carl and the women he loves and hurts remain as current as asphalt.