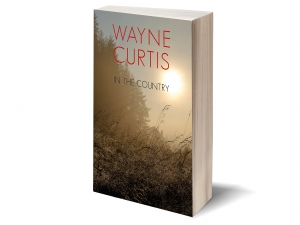 “My grandfather told me it was the little things in life that separated greatness from mediocrity,” Wayne Curtis writes. And it is author Curtis’s lucid and lyrical prose, his discerning eye for the telling detail and his nuanced understanding of the hearts of his characters that make each of theses short stories, set in mid-20th-century rural New Brunswick, a polished gem.

But there’s more going on here than just twelve finely crafted coming-of-age stories. Together they form a sweeping Faulkner-like narrative of social change set against the backdrop of the mighty Miramichi, the forests, and the farmland.

While the time and place is particular, these characters transcend it in their attempts to reconcile their traditional roots with the pull of urbanization, loyalty with individualism, romance with pragmatism, and their yearning to find love and acceptance. The characters linger long after you’ve closed the book. In the Country is indeed Curtis at his finest.