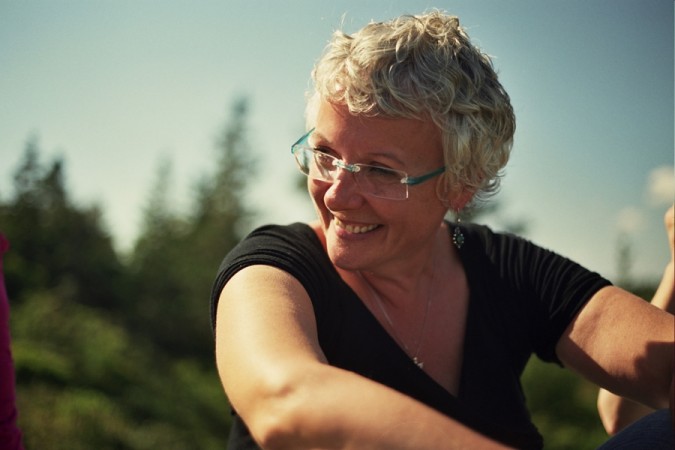 This past November, Catherine Banks was awarded the 2008 Governor General’s Literary Award for Drama for Bone Cage. The play is the darkly humorous story of Jamie, a young man torn apart by the brutality of his job as a clear-cutter in rural Nova Scotia. Catherine recently took the time to answer some questions from Atlantic Books Today about life as a playwright.

KW: When did you first start to think about writing the play that became Bone Cage?

CB: In about 1997, I wrote a monologue that turned out to be Jamie’s final monologue of the play. It was like he did the high vault onto the page and he’s never left me since, although I didn’t actually write a first draft until about 2001.

KW: Was it a difficult process?

CB: It was difficult in that I had just started the play when another character, Rose from my one-woman play Bitter Rose, “showed up”, and so I detoured to write that play. That was a three-year process and then some personal things came up and I just couldn’t seem to get back to Jamie. I thought of him sometimes—he was always waiting by the river until one day he was in his car driving away. That’s when I knew I had to start writing.

KW: When you saw Bone Cage on stage, did it look and sound the way you imagined it would?

CB: I don’t actually imagine my plays on a stage. I imagine them in the location where they are taking place: by the river, in a kitchen, in an old empty house…. But, I’ve been very lucky because designers have created beautiful sets and lighting for my plays.

CB: I was checking the Canada Council website at the appointed time that the list was scheduled to be posted because Angela Reberio, the retired publisher of Playwrights Canada Press, had convinced me that I might be on the list. Because the website was slow, I checked my email and there was an email from the Writers’ Fed of NS congratulating me. My daughter happened to be home so we screamed and hugged and hugged and screamed. Later in the day, I drove to Upper Stewiacke to tell my dear friend Leah—she had kept my babies many years ago so that I could write—that it was nominated. We sat in her kitchen and glowed. It really did feel enough to be nominated.

KW: How did you react when you learned you had won?

CB: Even though I had not for one moment considered that I would win, I did still look for the letter telling me “yes” or “no”. (I hadn’t taken in that the news would come in a phone call.) So I watched the mail. On the last possible day that I thought the letter would be here if I’d won, there was no letter in my mailbox when I came home from town and no special delivery notice pinned to my door. I knew I wasn’t going to win but still…. I walked into the house and there was a message from the Canada Council asking me to call ASAP. I called immediately, still thinking that they probably wanted to inform me that I hadn’t won, and then this beautiful voice said the incredible: “I have the honour of informing you that your play Bone Cage has been selected….”I was stunned. I was home alone, which was good because you aren’t allowed to tell anyone. Anyone. It was a pretty easy the first few days because I didn’t believe I had won. It got much harder later.

KW: What does being a GG award winner mean for your career as a playwright?

CB: I hope that it means more productions for Bone Cage. I think Governor General Award-winning plays are read by more artistic directors, and I have had some artistic directors be in touch about my work, which is exciting. I don’t know if I am exceptional in this, but I have had a lot of doubt around my choice to be a writer. Now I feel released from that feeling. (But perhaps that feeling will return.)

KW: How important has living in Nova Scotia been to the flavour of your work?

CB: Pretty important I think. I like writers who write about a very specific place. Quebec writers are my favourite authors and they write with a strong sense of place.

KW: Is your family supportive of what you do?

CB: Everyone is supportive up to a point—different tipping points for everyone, I suppose. But on some level, I think particularly around money, they think I’m nuts. My father is quoted as saying: “Playwrights live somewhere up under the eaves.” I asked him what that meant and he said something to the effect that playwrights can’t even afford a garret. That’s pretty funny. Still, when I did the production of Bone Cage, family members, including my former husband, donated money.

KW: Why do the stories you have to tell become plays rather than novels or poems or screenplays or…?

CB: I write plays and a few poems that I only show my most trusted friends. It isn’t that I slot something into a novel this month, a screenplay the next. I think in terms of plays almost always.

KW: What do people get out of reading a play in book format rather than watching it on stage?

CB: Plays are published to get them around the country and the world. Universities put them on course lists and they end up in libraries. Plus, I think they many of them are a beautiful read. Tennessee Williams’ plays for instance—you can savour his work when you read it. People often see a play once. Robert Bly says to read a poem aloud and at least twice. To paraphrase: The first time it [the poem] enters your brain. The second time it enters your heart. I think it is like that with a play—you can’t get it all in one sitting—at least a play that is rich in metaphor like Williams’ work.

KW: What are you working on now?

CB: I finished a new play called Missy and Me about a 49-year-old hairdresser obsessed with meeting Missy Elliot because she needs to ask her a question—not that she knows what the question is when she steals her husband’s plumbing van and heads for New York three days before her twenty-fifth wedding anniversary. It was really fun to write. Now I’m working on another one that I have probably talked about too much and so I won’t be able to write it. That’s the worse thing a writer can do, and I did it!