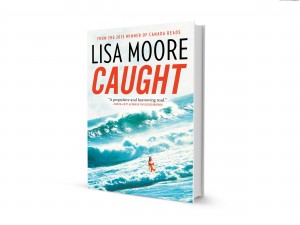 Since her critical and commercial breakthrough, Open, was published in 2002, Lisa Moore has become one of the most recognizable names in Canadian literature, having recently been crowned the winner of Canada Reads 2013. Her new novel, Caught, follows David Slaney, a 20-something Newfoundlander, who escapes from federal prison in June 1978 after serving five years for smuggling a boat-load of marijuana into Canada.

On the surface, Caught appears to be a complete about-face for Moore, whose more high-minded literary novel February told the story of a young mother widowed by the Ocean Ranger disaster. However, Caught works as both meditative character study and a first-rate page-turner. But it’s her skilful emphasis of the quieter moments, Moore’s trademark, that define the book, particularly those shared between Slaney and his girlfriend, Jennifer. Moore maintains a delicate balance, and she pulls it off with ease, guiding us through some seriously rough human terrain and a geographical landscape that stretches across the continent. A superbly written novel that crosses literary boundaries, Caught will surely garner her even wider readership.