In his first novel since completing the Long Stretch Trilogy, Linden MacIntyre brings us a powerful and provocative new story

Linden MacIntyre is a distinguished broadcast journalist who spent twenty-four years as the co-host of the fifth estate. He has won ten Gemini awards for his work along with numerous literary awards for his writing, fiction and nonfiction alike, often finding himself on bestseller lists across the country. His novel The Bishop’s Man claimed the Scotiabank Giller Prize in 2009.

MacIntyre’s new novel Punishment (Random House Canada) is “a powerful exploration of justice and vengeance in a small town shaken by a tragic death”. A corrections officer is forced to retire early from his job at Kingston Penitentiary and returns to his small hometown where is faced with a complex situation involving an ex-con he knows from prison, his first love and the suspicious death of her granddaughter, alongside uncertainties about justice and vengeance. It’s a complex page-turner complete with twists, betrayals and surprises. MacIntyre spoke with Atlantic Books Today about his newest work and the provocative incentive behind it.

Which part of this book, Punishment, did you write first? Last?

It was written in chronological order. I wrote the prologue section last, that’s the very first thing you read in the book. But when I was writing the main part of the book, I started on that first scene in St. Ninian where he goes to the courthouse and I wrote the very last page last. Now, I had written the last couple of scenes of the book in my head, long before I actually committed them to paper, or whatever you commit them to nowadays. I conjured them, I formulated them, I actually wrote them in my head but I decided I’m not going to write it down as the last of the book. I’m going to leave it in my head and if it’s still there when I get to the point where I have to conclude then I’ll consider it had weathered and has been seasoned and is the right way to end the book and that’s exactly what happened.

Without giving too much away, you leave a bit of a cliffhanger with some of your characters. Is it quite obvious to readers what happens to one of them in particular in the end?

You know what, somebody buys a book; it becomes their property. The story becomes a story that they will figure out, interpret and carry in their minds in a form that’s not always what I would have expected. Or is not always what another reader would necessarily share. In this particular book there are two aspects at the end that are left unresolved. The unresolved part is what happens next to the two principal men in the book. And life is like that. I don’t know. I do not know. I may down the road one day want to check in and answer those questions for myself and maybe even for anybody else. I leave it as a work in progress. So a reader can sit down and decide in his or her own mind what happened. Or what did they want to happen?

I think the story is absolutely factual in terms of its representation of the corrections system. Which is a system that is run with a lot of idealistic good intentions, mission statements that promise a lot, but a system that delivers very little for a number of reasons. Particularly in the climate now where you have a lot of pressure from ideology and politics to make the system reflect a tough on crime attitude that is embraced by a lot of important influential politicians. So the system, which never really has lived up to its undertaking to be a place of correction and rehabilitation, never has been able to fix broken people who end up in the system and then put them back out in the real world as productive human beings. It’s never really achieved that. But the system is a large bureaucratic operation that the character of which is defined largely by most of the people in it.

How does Dwayne Strickland relate to Ty Conn [real life convicted bank robber and prison escapee]? Is there a relation between the fictional character you’ve created in Dwayne and Ty Conn, who this book is in memory of?

Both are adopted, both are relatively young. Unlike Ty Conn, Strickland did his time and got out, Ty only got out by breaking out and getting killed in the process. Strickland has a lot of the ambiguous quality that Ty Conn showed to me, which is he’s institutionalized in many ways. He has an unrealistic understanding of how the world works, he’s a bit too cocky about his own intelligence, which the potential is there, but he isn’t as smart as he thinks he is. Otherwise he wouldn’t be living the way he is living and he wouldn’t be in prison.

But the principal value of my relationship with Ty Conn was that he gave me access to people and a place that very few people get to take advantage of. I was on his personal visiting list, I went to family gatherings within Millhaven. Through him, I got in. I got to see an awful lot of the way the institution works and see a lot of the diversity in there. Through him I met a lot of his friends, some of whom were terrifying, and some of whom were people who had done awful things but for very complicated reasons that I was able to come to understand through them. Essentially he opened up the world that I felt confident to visit in a novel. His similarity to Dwayne Strickland is quite superficial. He was a warmer, kinder person than Strickland, although they both end up in the same predicament.

What’s your intention behind writing fiction that borders on non-fiction, that reflects societal ills?

Exactly what you just said. I believe fiction is a totally legitimate and extremely effective vehicle for serious insight into how society works, or serious speculation, serious analysis. The very best of literature over the centuries has been revealing of human nature, social structures, institutions. Some of the greatest commentaries on justice and crime and punishment and just politics have come through good fiction. John Steinbeck probably revealed to more people the true nature of poverty and economic destruction in the Depression and how it affected a particular layer of society than any sociologist or economist ever could. The novelist who does it well takes people by the hand into situations that they don’t particularly want to visit and on terms that make those situations quite understandable and real by embedding big ideas in ordinary lives and ordinary places. I strive for that.

I found after many years in journalism I was at the best of times telling part of a story. I was telling superficial aspects of stories and I craved an opportunity to go deeper. And I had lots of opportunities, particularly in television, where I worked long-form television stories, but even then at the end of an hour you’re left with that feeling like most of what you learned, most of what you came to understand never got in the piece because it’s either too complex or it takes too long. At a certain point I said maybe fiction, maybe a novel. And I tried my hand at it and it has been sufficiently satisfying to me. And the feedback has been sufficiently encouraging that I continue to try to do that. 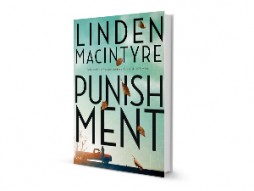 Why was it important to you to write this book?

It just got stuck in my head. I had to get it out. It was one of those magical moments, I was sitting by myself in my house in Cape Breton on an evening in the early spring before things got pretty and green. I was just sitting and looking out over the land and having a drink in total absolute quiet and peace and this idea hit me about the tension that would exist between a couple of people who had similar experience but had come to absolutely different conclusions about crime and punishment and justice. And what an interesting story it would be if you had this microcosm of a tiny place with two people with different, completely poles apart understanding of crime and punishment and justice set in the backdrop of that global period where notions of crime and punishment and justice were being applied in a massive military undertaking by the United States against Iraq. The United States had decided in the aftermath of 9/11 to demonize a person who they could credibly single out as being largely responsible for all the insecurities and all the misery in the world. And attack it. And in the process of course maybe get control of the assets and resources that wicked person controlled.

The same moral imperatives and the same materialistic motivation applied to the large global situation in 2002-2003 in reality and the small microcosm situation that I imagined in a little place in the middle of nowhere, where there’s this notion that by eliminating a negative presence in a community, you have made the community safe and you have protected important values and principles. Even if in doing so you have offended the most fundamental principles that keep the society safe and make it work properly, which are the principles of justice and how sometimes an obsession with law and order causes us to become a little bit blind when it comes to the fundamental principles of justice itself. And this is what happens in the book. You have an emotional response to a situation, you have it exploited by an individual with a very strong point of view, you have a scapegoat, and you have a disaster. And you have all of that happening on a global scale at the same time. It sort of came to me in a flash and I realized this is a book that I have to write down. Or it’s going to drive me crazy.