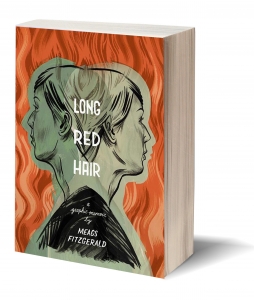 The 2015 Doug Wright Spotlight Award-winner Meags Fitzgerald is back to share her experiences growing up female and bi-sexual in the 1990s and 2000s in Long Red Hair: A Graphic Memoir.

This book holds much for graphic novel fans. Fitzgerald’s panels rarely follow the conventional square model, allowing her creativity to literally flow outside the box. Her drawing style is easy to read, but tiny details, like perfectly rendered “Buffy the Vampire Slayer” actors on the TV in her family home, add authenticity to the memoir and draw in the reader.

The storyline is aimed at young adult readers and may seem trite to those firmly in adulthood. Speaking as a former teenage girl, I could have used its message that we’re all just muddling along trying to figure out life and love for much of our early years. The book focuses largely on Fitzgerald’s attempts to understand and embrace her fluid sexuality, but there are many lessons about friendship and self-reliance for any young woman.