An exciting tale of a shipwreck and survival for young readers 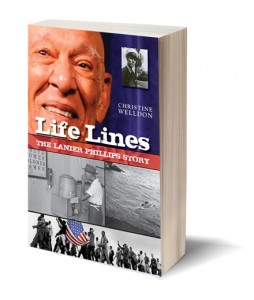 In 1942, 110 men lost their lives when the American destroyer USS Truxtun sunk off the coast of Newfoundland. Among the survivors was Lanier Phillips, an African-American serviceman who was rescued by the people of a tiny outport community called St. Lawrence.

Phillips had grown up in the segregated South where he experienced relentless racism that caused him to both fear and hate white people. His experience in St. Lawrence, where the townspeople treated him with compassion and respect, proved to be a turning point for Phillips. He went on to become the US navy’s first black sonar technician and a well-known civil rights activist who shared his transformative story throughout his life.

Young readers will be captivated by the exciting tale of a shipwreck and survival, but this book is more than just an adventure story. Author Christine Welldon has painted a compelling picture of the pervasive racism of the time, and while its grim realities are not sugar-coated, they have been sensitively presented with the target audience of ages 8 to 12 in mind.

The book is sprinkled throughout with photographs and blocks of interesting facts that compliment the narrative.

Life Lines is a well-told and important story about the power of kindness to inspire and uplift.