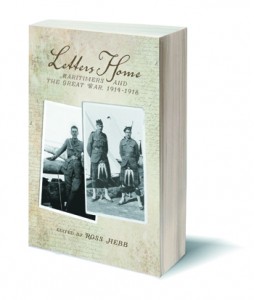 It is a fact noted by chaplains, medical personnel and battlefield comrades: soldiers who are about to die most frequently call out for their mothers. Ross Hebb reinforces this connection in his book Letters Home, a collection of personal letters written by more than 20 Maritimers during the First World War, mostly to their mothers. These documents have not been published before and were provided largely by descendents, with some from public archives.

Organized chronologically –from joining up to deployment overseas to (for some) returning home– these letters are a gold mine of primary information about the war and the letter-writers’ feelings towards it. The letters have immediacy to them as they speak to us across the years about those momentous events a century ago and run a full gamut of emotions: innocence, concern, love, hope, pride, apprehension, sadness. This is regional and social history during wartime at its best.