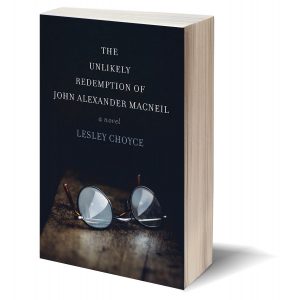 John Alexander MacNeil, who lives alone on the “sunset side” of rural Cape Breton, is a feisty, difficult man, a sharp-tongued crusty old Scot, but he transcends caricature or cliché. He has an egotistical rooster named Pierre Elliot Trudeau and a chicken named Margaret Thatcher and in the winter he keeps them in his house. Every election he votes for himself as a write-in candidate.

At eighty, John Alex has started worrying about losing his driver’s license and losing his mind, especially since the day he kindly stopped his car to offer a ride to a roadside mailbox.

His life is greatly complicated when Emily, a pregnant teen, comes to John Alex’s cabin in the woods for a haven. Emily is shunned by her folks and expected to flee to Halifax in shame, to hide and save her family it, but John Alex decides to shelter her and so both of them risk ire of hostile parents and town gossips and even the law. There are many other threads, but much of the story depends on this pregnancy and impending birth and much hinges on those who turn out to be unexpected and generous allies and those old acquaintances and neighbours who plot against the pair. This is a book of grudges and a book of forgiveness, contrasting human warmth and the warmth of maple firewood versus the cold of ice storms and the cold of censure and fear and guilt.

John Alex has a very folksy voice but this is also a philosophical book pondering the many cycles of summer and winter, pregnancy and fertility, death and birth and past and present. And it is a book of ghosts. John Alex’s wife Eva is dead thirty years but seems very much alive, visits John Alex often and hovers over the action like Banquo’s ghost, offering advice and memories and love. Even Emily hears the ghost speaking to John Alex one night.

When driving, John Alex may find himself in thought and in the wrong lane and this forces a local egg truck to veer off the road. Eggs fly into a pasture but in a comic touch, many eggs miraculously survive intact while riding perched on the backs of fleeing cattle. Eggs (and of course chickens) are a repeated image in these pages, somehow tied up with the meaning of life: perhaps the egg is being held up as a perfect creation, an image of fertility and growth and nutrition and strength and survival and adaptation. Young Emily even finds that she enjoys watching chickens in the living room now that she has no access to television; indeed she prefers them to numbing television.

The shape of the egg may also suggest Jungian integration and wholeness, with echoes of Robertson Davies and Fifth Business. In Emily and John Alex’s conversation, a chicken and egg kind of question arises, one that applies to people of all ages: do you try to change the world or does the world change you? This book shows that both kinds of changes can and will happen.

A different kind of question arises near the novel’s end: Will John Alex be left alone when Emily leaves? He dreads this, now used to company; plus she has given him purpose. Emily does have to leave him to make her life elsewhere but in a slight twist John Alex is not left alone or bereft; instead he discovers a new female companion, a happy ending for this old man by the sea.

Choyce’s chapters meander a bit at times, perhaps in imitation of our narrator’s wandering mind, but this is a lovely saga of learning and kindness and forgiveness. Despite the disputes and lawsuits and cameos from the RCMP and Social Services and even a brawl featuring a priest from Cameroon, The Unlikely Redemption of John Alexander MacNeil is a benevolent book, a spiritual book in many ways. Cape Breton is famous for grudges but by the end the sun is out over the sea and hapless bagpipes heard down the hill are in tune for once, the local piper finally finding all the right notes.

Mark Anthony Jarman is the author of 19 Knives, My White Planet, New Orleans is Sinking, Dancing Nightly in the Tavern, Knife Party at the Hotel Europa and Ireland's Eye. He teaches at the University of New Brunswick.