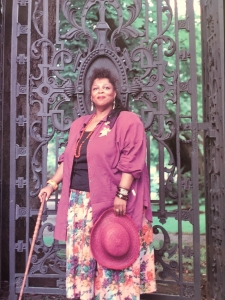 I had the good fortune of working with Maxine Tynes as her publisher in the late 1980s and early 1990s. In 1988, after the release of her first book of poetry, Borrowed Beauty, she was rightfully designated the title as the People’s Poet of Canada, an award established only one year earlier in honour of Milton Acorn. Maxine was a shining beacon of poetry in Nova Scotia in particular, where she wrote about her own life, the vibrant culture of the Black community and of the feminist ideals that fueled her work.

I have vivid warm memories of the summer day in 1993 when I drove Maxine around Halifax looking for locations to shoot a photo of her for the cover of an upcoming book titled The Door of My Heart. We were looking for just the right door for background. It seemed that wherever we stopped for a photo – flower shop, church, Public Gardens, university – people would come up and talk to Maxine. As a poet and performer, Maxine had become a celebrity. I’d seen this on other occasions and it was a testament to how Maxine’s words and presence had become part of Nova Scotians’ everyday lives.

Signing books at Christmas at the Forum, there would be a lineup at the Pottersfield booth of admirers wanting her signature and also wanting to share their stories with Maxine. I’d never seen anything quite like it. Maxine Tynes – poet superstar of this Maritime province.

George Elliott Clarke got it right when he wrote of Maxine’s poetry in The Daily News, “A refreshing change from the flat, disembodied voices that so often dull and deaden Canadian verse.”

Maxine was born in Dartmouth in 1949 and grew up there. She contracted polio as a child and it was complications brought on by the disease that led to her death in 2011 at the age of 62. She attended Dalhousie University and went on to be a well-loved high school teacher for 31 years. She had a dramatic flair that kept her students on their toes. She used her acting ability to create dynamic public readings and performances and on the radio, as well as the studio where she recorded one of Atlantic Canada’s first spoken word albums (also titled Borrowed Beauty) in 1987.

She produced three other collections of poetry along with that first offering, including Woman Talking Woman (1990), The Door of My Heart

Although Maxine’s poetry is still taught today in high school and university classes, it was her ability to re-energize the poetic form and connect with people of all walks of life that stands out in my mind. She wrote poems about solitude, love, despair, truth and beauty. She also gave voice in poetry to the lives of the physically challenged.

When Maxine died in 2011, she had been out of the public spotlight for a number of years. Although she had achieved much, received an honorary doctorate from Mount Saint Vincent University and had a room named for her in the Alderney Gate Library, many of us in the writing community had lost touch with her. And I grieve for that.

In classic form, however, the words of Maxine Tynes live on in print and in memory. Each generation needs a true “people’s” poet, a label often applied to some of the greats: Robbie Burns, Walt Whitman, Langston Hughes and Allen Ginsburg to name a few. Maxine was a key player in what proved to be a Black cultural renaissance in the early 1990s. She helped us recognize the value of the heritage of Black communities that had been so callously marginalized in Nova Scotia’s history.

The cover photo of The Door to My Heart (above) shows Maxine, dressed in purple, standing in front of the ornate iron gate of the Public Gardens in Halifax. She stands tall and appears proud and vibrant. Her very presence is a visual poem.

In “The Poet as Whole-Body Camera” she writes, “And if you seek my journey. And if our isms fit and mesh and meld us heart to heart to heart. Then, through this journey of poet and of those who read, those who follow, we shall go two by two by many, many fold.”