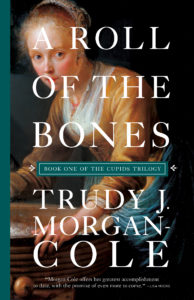 A few months ago, with the final edits on my book A Roll of the Bones completed and the manuscript sent off to the publisher, I thought back to the beginning of the process. So often, in writing historical fiction, there’s a passing reference, a name or a sentence, that snags my attention, makes me think I want to know more. I hadn’t thought I was interested in John Guy’s Cupids colony, the first permanent English settlement in Newfoundland, until I read a single sentence in an account of one of Guy’s voyages.

In 1612, John Guy sailed from Bristol to Newfoundland. According to this one-sentence summary in a Bristol chronicle, he brought fresh supplies for the colony of 39 men he had planted there two years earlier. The supplies included livestock; the livestock included sixteen nameless women.

Nearly four hundred years later, in 2010, the Newfoundland Government created/funded/promoted another of the tourism-driven “historical milestones” that are, apparently, essential to keep our economy ticking over. Those “Cupids 400” celebrations marked the founding of John Guy’s colony in Cupids in 1610. It was the first permanent English settlement in the country that we now call Canada.

It couldn’t truly be a permanent settlement, of course, until women arrived to make procreation possible.

Vaguely aware of the Cupids celebrations while they were happening in 2010, I glanced at the tourism information about Guy’s colony. That detail – sixteen women – caught my attention, as tallies of unidentified women in history often do. Who were these women? Were they wives of colonists, or unmarried women who (as would happen a few years later in Jamestown, Virginia) were lured out to the colony in hopes they would marry settlers?

Those sixteen women still sat, faceless and silent, in the back of my mind two years later, when US Presidential candidate Mitt Romney said during a debate that he had “binders full of women” who were qualified job applicants. The phrase went viral even before the debate was over: women not as individuals with voices, but as a quantifiable commodity.

Applicants for government jobs? We’ve got binders full of women for that. Wives for your new colony? Here are cargo holds full of women, shipped out along with goats, heifers and bulls.

Visiting Jamestown this year while researching for my current project, I went to see an exhibit called TENACITY: Women in Jamestown and Early Virginia. It included a list, drawn from the 1621 Ferrar Papers, of the names, ages, and occupations or background of fifty-six women who came to Virginia. A literal ledger full of women. I traced their names on the Legacy Wall, thinking, I wish we had this kind of detail for the women who came to Cupids. What a treasure-trove of information.

But what difference would it make, really, if we had an equivalent to the Ferrar Papers that provided us with a list of those sixteen women? Knowing that Anne Rickards was a widow who came to Virginia from London at the age of twenty-five is useful information for scholars. But for anyone who wants to imaginatively enter the world of these women, that biographical data tells us little more than does the fact that, in March 1613, the (unnamed) wife of Nicholas Guy of Cupids gave birth to the first English child in Newfoundland. It’s the only act a woman is recorded as performing in Newfoundland in those first decades of English settlement.

What is this project, anyway, of trying to recreate the lives of dead women through imagination, through words, through story? It’s the project that motivates me as both a writer and a reader, yet it has a quaint, second-wave feminist feel to it, as well as an air of impossibility. What do I gain, really, when I read a novel about a woman spying for the Allies in the First World War, or a woman surviving the Russian Revolution, or condemned as a witch in 17thcentury Lancashire? When I write a novel about a servant girl following her mistress across the Atlantic to Cupids, Newfoundland?

We imagine these women of the past; we use stories to bring the dead to life – but we can never imagine them as they really were. Writers of historical fiction can’t help projecting our own vision and values onto our stories of past women. It’s why so many heroines of historical romances are high-spirited red-heads who reject arranged marriages and run away from home, disguised as boys, to pursue their true passions.

Of course, as a writer, you try to avoid the tropes. You do your research. You think about how culture shapes individuals, shapes attitudes. You read contemporary writings – especially women’s writings, when you can find them. You think hard about how a woman in that place and time would have responded to the historical events she was part of.

The end product, even at its best (and for its best I’d nominate, in recent years, books such as Rachel Kadish’s The Weight of Inkand Jessica Shattuck’s The Women in the Castle) is always a conjuring trick, a game of pretend. What we long for, of course, are the voices of the women themselves. Those longed-for discoveries of a hidden diary, a trove of letters, an unpublished manuscript, that we hope will give us a direct, unmediated glimpse into the reallife of one of those unnamed women of history.

When I was researching for another novel a few years ago, one set in early 20th-century St. John’s, I discovered, in an online archive, a personal journal kept by a girl of the same age as my main character, in the same city, at the very same time period. With great excitement I clicked on the pages … only to discover that the writer kept a detailed account of the weather every day. That was it.

I’ve seen a lot of St. John’s weather. Reading a daily account of it from 1911 was not the illumination I’d hoped for.

In historical fiction we hope to recreate what has so rarely been left for us to read, and what we can never truly recapture: women’s voices. A sentence, a phrase, a word that sounds true, even when it isn’t. A word that rises out of the silence of sixteen women, counted and shipped with cattle across the Atlantic.

I’ve been engaged in this process, sparked by this single sentence in a Bristol chronicle, for over two years now. The book is out now, ready to find its way to readers. And it has a main character who – well, her hair is auburn, and she could be described as spirited, or at least strong-willed.

At least she hasn’t run away from an arranged marriage, or disguised herself as a boy. Yet.

But it is going to be a trilogy, so there’s still time.

Trudy Morgan-Cole is a writer and teacher in St. John's, Newfoundland. Her historical novels include By the Rivers of Brooklyn, NL Reads 2019 winner Most Anything You Please, and the just-released A Roll of the Bones, the first volume of the Cupids Trilogy. When she's not writing, Trudy teaches English and Social Studies to adult learners.