Leaving for the Seal Hunt: The Life of a Swiler 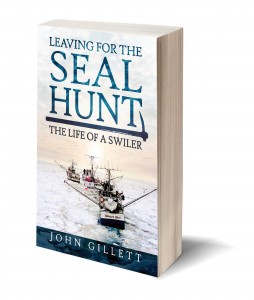 I went sealing in a speedboat only on holidays or weekends in 1972 and 1973 because I was attending trade school and college. On a mild, calm day one February, I had a holiday from school, so Winston Froud and I decided to go sealing. A lot of small speedboats and their crews had already gone. There was a band of water between the ice floes and the land, but most coves and harbours were still frozen. I borrowed my father-in-law’s boat, belonging to Allan Roberts. Allan was a lighthouse keeper in Twillingate, and had a small speedboat that he could handle himself, hauling it up or launching it.

Winston and I put an old, Gale fifteen-horsepower outboard engine on this small boat and departed Sleepy Cove on Twillingate Island. It was very foggy and calm and you could only see a hundred feet in front of the boat on times, so we steered by compass. Most of the Twillingate boats went out of Sleepy Cove because this was the only place free of ice. The ice had broken off from Lower Head to Western Head, a distance of six miles, keeping a lot of sealing boats trapped by the shorefast ice from getting out. If you had a boat in Sleepy Cove you were either lucky or unlucky to get sealing that day. Winston and I were among the unlucky.

We were the last boat to leave the cove because we didn’t have things ready, so it took a while before we were able to leave. We steered in a northwest direction for a few miles and didn’t see any seals, so we continued on. We heard a few rifle shots, and it wasn’t long before we saw a seal. I put the crosshairs on its head and was about to squeeze the trigger when I heard a roar like a big jet about to take off. This was wind coming.

I shouted to Winston, “Heave her around,” but then the wind hit us, nearly capsizing our little boat. There were ice pellets and freezing spray coming from the northeast. I knelt down in the front of the boat with the compass. Winston would watch my hand for directions; he couldn’t see very far because of the ice pellets hitting his eyes.

The temperature dropped well below freezing in just minutes, and in order to see which direction to go, the compass face had to be cleaned constantly because of freezing spray coming over it. Our situation was becoming critical; ice was starting to make on the boat, causing the windward side to go deeper into the water. The paddles, gaff, and guns were frozen in one big sheet of ice. And then our engine started to freeze up and slow down. We bailed water the best we could, but it was freezing in the bottom of the boat. When we moved, a slab of ice that had frozen on us from the spray would fall off our rubber clothes. I shouted out to ask Winston if he was all right and he would nod yes, but I was getting anxious.

We still hadn’t seen land, but the visibility was getting a bit better and the wind now was northern and getting colder. Suddenly, I saw the top of Sleepy Cove, Gull Island, but we were not safe yet. The engine seemed to be slowing down more, and we had to cross Sleepy Cove Tickle yet. When we got in the lee of the island we wanted to beat the ice off the boat before we went across the tickle, but we didn’t want to slow down the engine or take too much time, afraid that the engine would quit. We could see the seas going up the cliffs across the tickle and knew it would be certain death for us if the engine stopped.

In the raging water we decided to make a run for it across to the beach in Sleepy Cove. Water was coming over the boat in all directions. Finally, we headed for the cove, where water was breaking almost to the top of the beach. As we were heading into the cove, I shouted as loud as I could to a couple of fellows on shore to grab our boat when we came in on the surf. If they didn’t grab the boat, we would be rolled over from the top weight of ice when the waves retreated, and we would be thrown into the water.

The two fellows that I sang out to were George Rogers and his young son Lloyd, who were neighbours of mine. They had gotten in just minutes before we did. Once we hit the high point of the beach, George and Lloyd held the boat fast, and by the time the next wave came, Winston and I helped get it out of the water. Some of the boats that came in after us swamped on the beach. After we had our boat secure, we headed home with thoughts of the other sealers who were still out there. Winston told me later that he prayed all the way in.

Darkness came and there were sealers missing. The weather was still bad and getting colder. My next-door neighbour, Joan Clarke, advised us that her brother, Roland Churchill, wasn’t in. Her husband, Martin, wanted to know if we saw him and I told him no. We didn’t see anyone out on the water. It wasn’t until later that night that Roland and his sealing buddy Clarence Clarke showed up safe. They had made several attempts to come to land, but the water was too rough. Each time they had to go back to the safety of the ice.

Roland and Clarence had a seal aboard but couldn’t get it overboard because it was frozen to the bottom of the boat. On their last attempt they made it to a cove on Burnt Island, just off Twillingate, and had to make the long trek through deep snow across Burnt Island Tickle to their homes. The wind had blown Clarence’s cap away and his soaked, wool mittens were misplaced in the dark. Clarence had a one-piece snowsuit on and it was frozen so hard that it had to be cut off. Both Roland and Clarence spent a week in the hospital with frozen hands and ears. I went to see Clarence at the hospital and he was a pitiful sight, with watery bladders hanging down from his ears and hands.

Twelve o’clock, midnight, came and Wilbert Legge and his buddy Roland Cooper, Sr. were still missing. The icebreaker had been notified. They started searching for them and picked them up around 2:00 a.m., half a mile from the Berry Island, Herring Neck. Wilbert and Roland had hauled their boat up on the ice and tipped it up on its side, making it into a lean-to. They broke pieces of wood from their boat and put them in a pile to start a signal fire if they saw a boat’s lights. When they saw the lights of the icebreaker, they threw gas on the wood and lit the fire. Wilbert and Roland, along with their boat, were on the Coast Guard ship for three days. In their words, “We were treated like kings by the skipper and crew. The best of food and nice white linens on our bunks every night.”

Leaving for the Seal Hunt: The Life of a Swiler
By John Gillett
$18.95, paperback
Flanker Press, February 2015

John Gillett was born in the small outport of Hart’s Cove, Durrell, Newfoundland and Labrador. He lives in Twillingate with his wife, Linda. They have two children, Sherry and Richard, and five grandchildren. In his spare time John likes to paint folk art.