Learning About the PEI Mi’kmaq

Minegoo Mniku, the Mi’kmaq Creation Story of Prince Edward Island (Epekewitkewey A’tukwaqn) is a new bilingual (English and Mi’kmaw) children’s book published by The Acorn Press. The story is retold and illustrated by Sandra L Dodge with translation is by Georgina Francis. 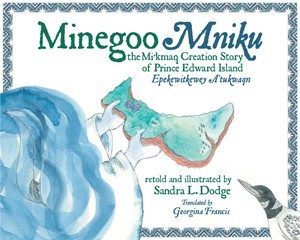 The book weaves the tale of how Kluskap, the Mi’kmaq people and Prince Edward Island came to be. It’s done at a level that both younger and older children can understand and it provides an excellent opportunity to learn some Mi’kmaw words.

Story extension activities are a way for children and families to delve deeper into a book, beyond simply reading it and setting it on the shelf. Doing activities that explore the ideas in the book allow children to understand it on a deeper level.

The Great Spirit forms an enchanted island. It is called Minegoo. It is the most beautiful place the Great Spirit has created. It has dark green forests, and blue sparkling waters, and green grassy shores, and gallons of clouds: wispy clouds, flying clouds, puffy clouds, running clouds, pink and blue and yellow and golden-edged clouds.

In the story, The Great Spirit creates his people and then uses the rest of the red clay to create Minegoo (Prince Edward Island). This activity will allow children to create their own miniature model of Minegoo, through a diorama (a 3D scene set in a box).

Start with the bottom half of an empty box, such as a shoebox, and paint the interior blue for the sky background. Children can then examine the shape of the island that they see in the book. Maps with topography features to inspect PEI in more detail may help too, especially for older kids. They can create the island shape from red clay and place it in the box. Water can be represented by blue fabric and trees can be made from real materials found on the forest floor, such as pine needles (both white and red pine are native to the island) and twigs with leaves on them.

The fanciful multicoloured clouds described in the book can be created by colouring your own cotton balls with a mixture of half a cup of water, a teaspoon of vinegar and some food colouring (or use premade Easter egg dye if you have some around). Stretch out the cotton and then coat it with the mixture either through dipping the cotton in a bowl or spraying it on. Lay them out to dry on a covered baking pan. When ready, have the children stretch them out again to look fluffy and wispy, and glue them to the back of the diorama box on the blue painted sky.

Near the end of the story, Kluskap shoots his magic arrow at the Sacred Birch and creates a wigwam, snowshoes and a canoe from the tree for his newly created people. The white birch-tree bark has also been used to create containers for food, toys, hunting and fishing gear and musical instruments.

This activity will show children how to create a simple birch-bark-covered container using an empty tin can, hot glue gun and birch bark.

Gather a large singular piece of birch bark. Be sure to take it from fallen trees only as removing bark from live ones can damage them. You may need to soak the bark in warm water to soften it up first. Once it’s flexible, place it around the tin can and mark the length and width needed. Trim the edges to even it up.

An adult should run hot glue around the can and then quickly and carefully place the bark on the can. Have the children press down on the bark to attach it to the glue. Use elastics to hold it in place and clip clothespins to the top of the can over the bark for added stability.

Leave to dry overnight and then remove the elastics and clothespins to have a beautiful birch-bark container for pencils or other utensils.

Further extension ideas are to learn some Mi’kmaw words from a member of the Mi’kmaq community or by using the online talking dictionary at mikmaqonline.org; learn more about Kluskap and the many stories that he appears in; and attend some of the public Mi’kmaw events held around the region.

Heidi Tattrie Rushton is a writer, blogger, Mama and consultant living in Halifax.