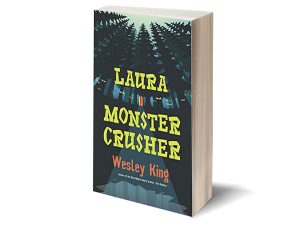 In Monster Crusher the titular character, Laura Ledwick, is often bullied for her size, which has resulted in nicknames like Laura Lardo and Laura Largebottom. Even though she and her family have moved to a new town, these taunts continue, causing Laura to have low-self esteem–at least until she hears a strange rattling in her closet. After trying to find the source of the noise, she stumbles across a strange underground world where her size is eventually considered an asset in a centuries-long battle against monsters.

Laura herself is an extremely relatable, likeable and multi-dimensional character who readers will be rooting for. They will want to know more about her with each turn of the page. While the secondary characters do round out the universe quite nicely, they are a bit stereotypical, with two archetypes being the popular blonde mean girl and the nerdy love interest. However, as Laura sheds her own stereotype, most of these characters add to their own personalities as well.

Most of Monster Crusher is positioned as a build-up to a battle between Laura and one of the monsters, but once there, the battle feels rushed and the rest of the story feels like a very long first chapter. After all, the book does have the phrase “monster crusher” in its title and many readers might expect more interaction with these creatures. This can be overlooked though as Monster Crusher appears to be the set-up for, hopefully, a much larger universe for Laura and her adventures.

As a whole, Laura Monster Crusher is an admirable tale of self-acceptance that will show readers of all ages that just because something is considered a flaw, it doesn’t mean it is.