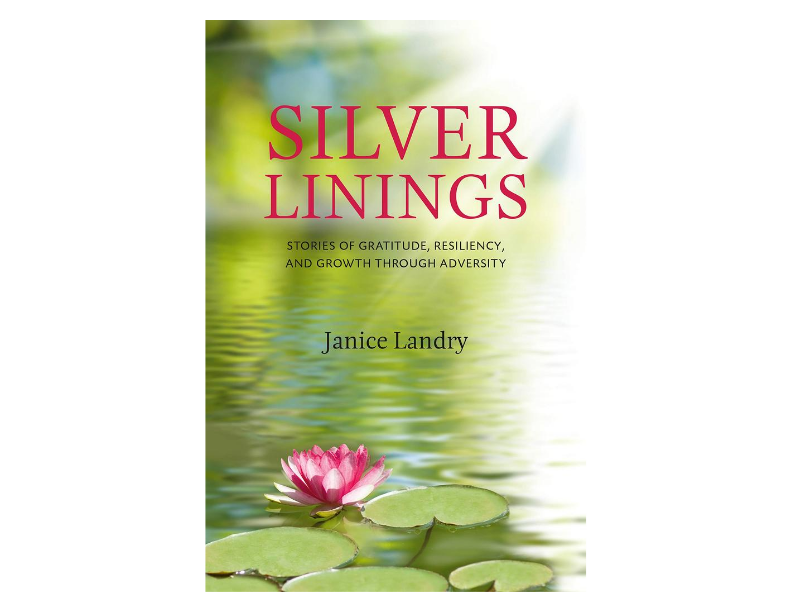 “What are you grateful for?”

This unique project marks the award-winning writer’s fifth book. Like her past works, it is deeply personal, for the author and her subjects.

Landry’s journalistic talent for putting people at ease is evident. Every chapter is laid out in a captivating combination of interviewee biography, her own perspective of the interview, and transcript of those candid conversations. She spoke with fifteen Canadians and two Americans, many whom have overcome hard-to-fathom adversity with grace and the very gratitude that is Landry’s focus.

Take, for instance, fellow Nova Scotians Paula Simon and Robert Chisolm, who lost their son at eight months old, but speak of the gift of loss. Or the book’s prologue writer, Saskatchewan native Alvin Law, a professional speaker who is most grateful for “being born without arms, because it sent my life on the course I have taken with pride and honour.”

There’s also paramedic Stefanie Davis Miller of Paris, Ontario, who was diagnosed with Complex Post-Traumatic Stress Disorder—she prefers the stigma-reducing term PTSI, or Post-Traumatic Stress Injury. She suffered multiple unrelated traumas. Her wrenching stories of emotional survival accompany many others from first responders, who are near and dear to the author’s heart.

Opening up about your personal traumas and darkest times is no easy task, especially knowing they will be printed for public consumption. One of Landry’s gifts is sharing these often-troubling yet relatable stories with a real sense of compassion and empathy.

Landry herself lost her firefighter father Baz Landry in 2006. She shares his story in The Sixty Second Story: When Lives are on the Line. She also lost her dear friend Audrey Parker, who chose to leave on her own terms November 1, 2018, through Canada’s MAID (Medical Assistance in Dying) program, after her breast cancer spread aggressively. Most recently, Landry suddenly lost her mother, Theresa, while working on Silver Linings.

“It took me more than a year, and until after my mother died, to figure out my answer to this question,” Landry writes. “I am most grateful that my father, Capt. Basil (Baz) Landry, M.B., of the Halifax Fire Department did not die in the 1978 house fire from which he and his colleagues recued an eight-week-old infant. Our collective ability to cope, as a family, would have been severely diminished.”

Like her interview subjects, and like us, Landry has her own stories of resiliency through hardship. She doesn’t hesitate to follow the openness of the people she profiles by pouring her own heart out on the page.

Dr. Robert Emmons, a California-based gratitude expert, perhaps answers her question most succinctly, in a way that seems to sum up the overall sentiment of Silver Linings. His source of gratitude?

“I’d have to say it’s the ability to love and be loved,” he says. “I think that would take precedence.”

For Landry, who dedicates this book to her friend Audrey and mother Theresa, Silver Linings is clearly a labour of love.