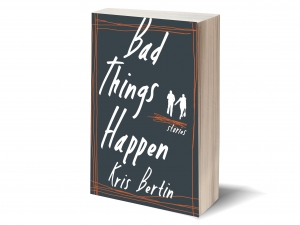 On the surface, these stories of labourers (drivers, garbage collectors, a janitor, a thief, con artists, drug dealers and an exterminator, among others) look at how people behave when things fall apart. When they jump on or fall off the wagon, when they make an unethical choice, when they fall for the wrong person or lose someone.

Digging a little, the stories are about the delicate balances we strike, the values or assumptions we base them on and the way any shift forces us to reevaluate. Sometimes we make compromises to alleviate our suffering and that can hurt us worse in the long-term.

Take Chris, who appears in three of the ten stories. He falls for a bad girl, goes bad for her sake and his soul suffers immensely for it. In the end he finds peace in laying pests to bloody rest.

Bertin shows us fairly average people on their worst behaviour and adeptly layers parallel imagery. Most writers writing about garbage collectors would be satisfied with a brief examination of the contents of their characters’ loads. Bertin delves deeply into our lives’ detritus, “as if a person had been dissolved in the garbage bag and only their outermost layer remained.” He dreams up all kinds of twisted remnants of what could be ordinary lives.

When describing a philandering father figure who has an affair with a disabled woman just “to efface all prior hound-doggery,” Bertin shows us “a ramp, half-built…on one side of the house like a broken waterslide” when their relationship inevitably dissolves. The rebellious son “smokes cigarettes on it, dangles his legs over the edge.”

Drilling one more layer, Bad Things Happen is about how we learn to relate to the world and each other over time, with characters of all ages and phases as illustration. It’s about love, whether a mother (somewhat ineptly) nurturing her troubled son or two middle-aged lovers muddling through their parents’ more torrid love lives. “I get mad at him for getting mad and pretending he’s not. I do it by pretending I’m not.”