The Bastard of Fort Stikine: The Hudson’s Bay Company and the Murder of John McLoughlin Jr. (Goose Lane Editions) is Debra Komar’s third book in a four-part series. Using archival research and modern forensic science —ballistics, virtual autopsy and crime scene reconstruction— she investigates what really happened the night chief trader John McLoughlin Jr. died in 1842. She also looks at the larger philosophical question of ‘what is justice’ by reaching back in time to try to solve the unsolved murder 170 years after it happened.

A Fellow of the American Academy of Forensic Sciences and a practicing forensic anthropologist for over 20 years, Komar has investigated human rights violations for the United Nations and Physicians for Human Rights and testified as an expert witness in The Hague and across North America.

Atlantic Books Today caught up with her to learn about the inspiration behind her investigations, her process and the intricacies of complex storytelling structure.

What inspired you to not only investigate these historical Canadian crimes, but also to write about them, and in such a way that makes them accessible to both history buffs and armchair detectives? 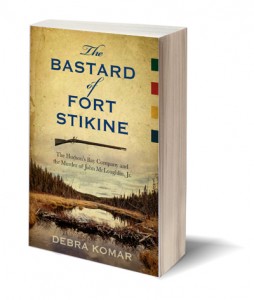 For 20 plus years I was not only a professor but I worked for international human rights. I did thousands of cases—I stopped counting after 6000 and that was many years before I retired. When you do individual case work or even large scale international human rights, you answer the questions that the courts want you to answer, which makes sense, you are working in service of the court. As a professor I would do research and again, my job was to fill in the holes in our methodology, figure out ways of answering questions we couldn’t answer. But when I retired, I realized I had larger philosophical questions that I wanted to look at in terms of crime and justice and all of those kinds of issues.

For this series, I wanted to look at using historic Canadian crimes, applying modern forensic techniques, methods and attitudes to them to see not only if the answers would change, but also as illustrations for questions that still remain unanswered in our system today. I didn’t just want to do it for an academic audience. I wanted to try and make the material accessible to a wider range of people. I think the questions aren’t purely academic. They are interesting and relevant to all of us, anyone who potentially might enter the criminal system.

What do you find rewarding in this process?

Coming to a better understanding of what justice is. In fact that’s actually one of the focuses of Bastard. We have this very narrow view of it that comes from our court systems. Somebody gets charged, they are found guilty or innocent and then punished. But what happens in those cases, again with international human rights, when sometimes there wasn’t a specific person being blamed, or when you’re talking about crimes of such magnitude it’s impossible to necessarily pin it on one person. It’s the same sort of thing with historic crimes. If we change the answers, which modern forensic science allows us to do, what then do we do with the crime? The court system has no mechanism in place that allows us to change our answers to crimes that are so long past. How do we reconcile the fact that the science has advanced, but the system it is serving has not?

What do you find challenging on these endeavours?

The survival rate of the material. We’re very hit and miss in this country in terms of what we chose to hold on to. You would think for cases that end with the execution of an individual that we might have some impetus to hold on to material longer than we ever did. It also showcases what we think of as important in this country. There was an order in the 1970s simply to go back and destroy all the historic material because they didn’t want to pay to store it. I don’t know if that was a really good idea. Not just in terms of how it impacted me trying to research these things but in terms of our history as a country.

What made you chose this particular crime? 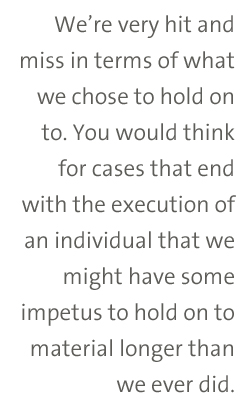 I always start with the questions first, rather than the cases. If you remember a few years back there was Richard III found in a car park in England? The whole idea of biohistory and how it’s being approached not only in terms of academics but in terms of the media, the focus is 99 times out of 100 that a body is found, DNA is run, the skeletal remains are identified, it gets front line coverage and then that’s it. In terms of what I used to do for a living, identifying the body is the first step. It’s not the last step. If I had stopped at that point I’d have been fired. This idea that simply putting a name to something is in and of itself the goal rather than simply the first step is not something that sits well with forensic science.

What I wanted to do was find a case that would allow me to say ok, not just going to rely on the crutch of DNA. DNA only answers the question of who. I wanted to find a case, an unsolved murder from our past, and see if by applying a broader spectrum of investigative methods, could it be solved at this last stage. And the answer, at least with John McLoughlin, is yes.

What was your intention in reconstructing this event for this investigation?

Partly to see could it be done and to illustrate that it can be done.If we have the mechanisms and the ability to go back and reevaluate crimes in our historic past, what is the legal system going to do to catch up to the science?

We have various components of the medical-legal system that are growing at different rates and what I’m hoping this book illustrates is that the science is doing fine, let’s see if the legal system can learn to catch up with it.

How long did you spend researching this book, and what did that research entail? Where did it take you?

Two and a half years. John McLoughlin Jr. is buried in what is now Oregon City, or Fort Vancouver, down in the States. I went to Wrangell, Alaska, where the fort actually was, to see if there was anything left of it. The answer to that would be no.

Initially it was identifying the case, then actually collecting the material, what still exists in terms of full spectrum of evidence that’s still available, still could be looked at, still could be evaluated. That took a period of time. Then there were thousands of pages in the Hudson’s Bay Company archives and wading through all of that, looking to see what actually relates to John McLoughlin, trying to figure out who all the players were, how did they get there, what happened to them afterwards.

There are two major characters in the book, George Simpson and John McLoughlin Sr. who are quite well known in Hudson’s Bay Company historical circles but their involvement in this particular case is less well documented, so wading through all the material on those two as well. Trying to be able to piece together all the various aspects of the case so that I could then work it the way I would a normal forensic case. You gather up your evidence and then you analyze it, put it together, create the narrative and hopefully come to some type of conclusion. 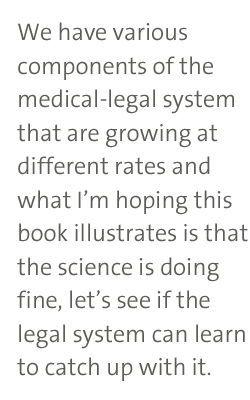 What made you decide to lay out the book as you have, with these historical vignettes that so colourfully tell the story, alternating with more scholarly chapters?

There are two storylines. One is the historic ‘who are these people, what are their backgrounds, how did they come to be at this fort’, and then there’s the actual reconstruction of what happens in the last 24 hours of John McLoughlin’s life. So for me it was a narrative device where you have the ticker leading down to his death that creates the tension and moves the story along, and then you have the background material that actually lets you know who these people are, how everybody came to be there, what their motivations are and so on, so that in the second half of the book when the storylines meld, it actually makes sense.

It’s non-fiction of course, but did you need to edit out parts to make it work?

It certainly went through three major revisions and part of that was storytelling and structure. What there was, essentially, was an enormous amount of material and a number of narrative threads that took me several efforts to try to get it so that the crime was one story, McLoughlin’s life in general was one story, and then what happens after the crime is yet another. There are two chapters at the end where for all intents and purposes I go through the crime scene and solve it, which is purely modern, breaking-through-the-fourth-wall, talking-directly-to-the-audience kind of thing. It took a few shots to get it right.

What’s your next book about ?

The final book in this series is called Black River Road. It’s the story of a well-known architect in Saint John, NB who’s accused of multiple murders and I use that case to answer the question is everyone capable of murder?

There’s a theory within forensic science which says all human beings can kill, that there’s no suite of character traits that make someone incapable of it and therefore what do the implications of that mean to the way we set up our criminal justice system, specifically looking at the character of the accused. If everyone’s capable of murder, then inherently no one is incapable of it. This is another case where forensic science has grown up faster than this particular aspect of our court system. The way we deal with character now is the exact same way we dealt with it in 1850. And that’s what the case is meant to show. The rest of the system has grown-up, but this particular question has not.