Getting to know King’s Co-Op Bookstore in Halifax

In spring of 2006 the students at University of King’s College were fed up with trekking the streets of Halifax in search of their textbooks, which could be at any one of 6 or 7 locations. Founders Dave Jerome, Graham McGillivray, Paul MacLeod, Chris Parsons and Faith-Anne Hill decided it was time to open a bookstore on campus. Because the the King’s Students Union was not allowed to own a business, the bookstore was born as a co-operative, student-owned and democratically run.

They selected me, Carolyn Gillis, to manage it. I had managed the BookMark in Halifax for three years and then became a sales representative for various small and medium-sized Canadian publishers. I was ready for a job that involved less travel and this position meant I could sleep at home while still working in the industry I love very much. 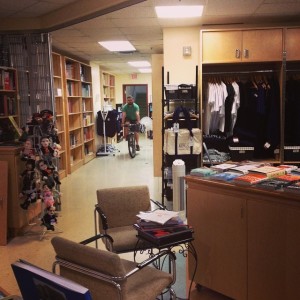 The process of opening the King’s Co-Op Bookstore was fun and crazy and baffling. The first hurdle was finding a location on campus. We were told we could open the store in the basement of the new Academic Building, known around campus as the NAB. When Dave took me down there to show me the space I looked around, looked at Dave and said “But Dave this is a hallway.” He replied: “This is the space the University is letting us use. We have to make the Bookstore here.” I looked around again and said “But Dave this is a hallway.”

We made it work and created one of the most physically unique bookstore spaces in Canada, if not the world. It is the Transformer of Bookstores. We have bookcases that fold and lock, many shelves on wheels and it all gets opened up and spread out each morning and put back in the cage every night.

From the beginning we decided to open to the public. We wanted to live up to the Bookstore part of the name King’s Co-op Bookstore, so we’re not just text books! We sell fiction, especially Canadian fiction, poetry, history, philosophy and Atlantic books of all kinds. One of the best parts of my job is talking to people about what they enjoy reading and recommending books. Even better is when they return to tell me that they loved it and what more. 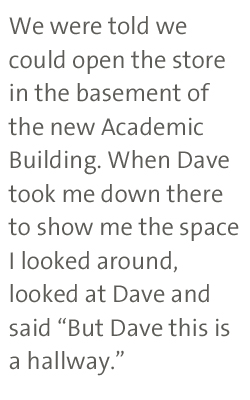 We also participate in author events all over town, but it so wonderful when we have an author come here and we can bring book lovers and authors together. I love watching those conversations happen.

One of more memorable moments was the Harry Potter Party we threw in 2007 when Harry Potter and the Deathly Hallows (the last book in the series) came out. We had dinner in the Hogwarts Dining Hall, a scavenger hunt, a dragon fight and watched the film Harry Potter and the Goblet of Fire. At midnight, when we could finally sell the book, everyone counted down the last 10 seconds and we started selling the book straight out of the boxes. I was reminded of that night this year when one of the King’s students hired this spring told me she had been at the party and loved it. It’s amazing to know you’ve been a part of creating a great memory for someone.

Our location is a challenge, hidden away in the basement of a building which itself is hidden in behind the main campus, that does not lend our store to being discovered by accident. In fact, when people exit the elevator for the first time they’re usually surprised to find themselves in the bookstore. I am told the vibe is really welcoming and comforting. We’ve worked hard to build something that’s important to students and book lovers across Halifax. We hope you’ll come check us out.

[17/12/07 Editor’s postscript: The King’s Co-op Bookstore is now under new management, which has also shifted its focus away from Canadian fiction and Atlantic publishing.]

Carolyn Gillis is the manager of the King's Co-Op Bookstore located at the University of King's College in Halifax. Follow the store on Twitter at @kingsbookstore