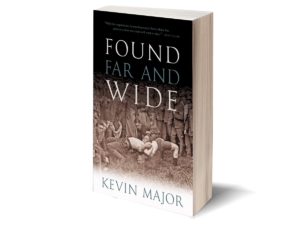 Kevin Major’s Found Far and Wide, the story of Sam Kennedy of Harbour Main, Newfoundland, is at once a kind of bildungsroman and adventure novel, mixing history and fiction in an effective narrative bolstered throughout for Major’s deft handling of drama and his raw but poetic prose.

We first meet Sam in turn-of-the-century Harbour Main where, of course, fishing provides for all. It’s a small, close-knit community where fishermen are paid in credit, not cash, in return for staples at the local merchant store. Sam, awakening to the reality of a changing world, finds his borders too close. He moves to St. John’s looking for work, where he has his first sexual encounters and soon, despite no experience, is taken aboard the sealer SS Stephano. Sam finds he’s not quite cut out for the slaughter, but has keen eyesight and is used as a spotter. History comes into play as Sam’s ship is helmed by Abram Kean, whose son Westbury captains the ill-fated SS Newfoundland, which has become stuck in ice. Major’s portrayal of the 1914 sealing disaster (77 dead) is believable and chilling and could have made a powerful novel in its own right.

Throughout the novel, Major does an excellent job of avoiding sentimentality and presenting scenes with spareness and power, and these traits are set to good use when Sam enlists at the beginning of the First World War, and is sent to Egypt and then to the Dardanelles (Gallipoli, present day Turkey). In his regiment is Johnny, a sniper from St. Anthony. Johnny and Sam form a deadly team – one the sniper, the other the spotter. Here, through stories and a photograph, we meet Emma, Johnny’s fiancée, who will soon haunt Sam.

It’s during these fights with the Turks that Major provides a powerful night battle, in which a small team of Newfoundland soldiers captures an important piece of Turkish territory (followed by a staggering scene of weather gone wild). Major superbly captures the chaos and ugliness of war and Sam is forever scarred when, while assisting with evacuation from Gallipoli, Johnny is killed.

Sam keeps with him a letter from Johnny to Emma.

The novel continues its episodic nature, bringing Sam to New York City to work in the construction of the Empire State Building, but after a falling out he finds himself involved in smuggling rum (it’s prohibition in the US), which he takes to quite easily, but is soon moving into the unfamiliar territory of new social circles, of floozies and poets. Eventually he returns to work in high steel, knowing he needs to make an honest living.

It’s around this time that we begin to see the effect of PTSD on Sam, and we see a yearning for something greater in him, to find home, love, to quieten that part of him that wanders. All the while he continues to dream of Emma.

Newfoundland comes full circle when Sam hears Wilfred Grenfell in New York. After the show, Sam waits to talk to Grenfell, and his connection to Johnny, who had worked for Grenfell, lands him work in St. Anthony for Grenfell’s mission. Here Sam finally meets Emma, finally delivers the letter Johnny had entrusted him with. He has read the letter, which asks Emma to consider Sam should he (Johnny) die in the war. Emma, however, is cautious, and a slow, ultimately unsuccessful courtship begins.

Sam leaves St. Anthony and heads farther north to Cartwright to assist the Grenfell mission with the arrival of the touring Italian Air Force, led by General Balboa. While this serves to introduce the rapidly changing world and the looming presence of another war, it, along with a following section featuring Sam’s fleeting friendship with Charles Lindbergh, carry less weight and have more the feel of fantasy than the profundity of the earlier sections (regardless of how historically accurate they may be).

We do, however, see the now deepening effects of PTSD on Sam, especially in a scene where he shouts at Lindberg about the coming war, and mocks Lindberg’s faith in mankind’s common sense. Found Far and Wide is a quick read, and it’s easy to imagine an expanded novel. But as it is, we get to see important, formative Newfoundland history from the point of view of a kind of Everyman, get to see the world in a time of great upheaval and its effect on a very human Sam Kennedy.