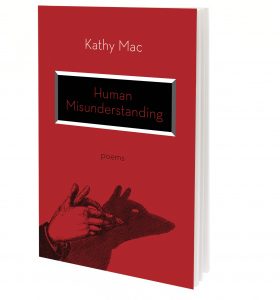 Kathy Mac’s latest book, a collection of three long poems, is sequenced, polyphonic, multi-textual in character and focused on the disjunction between intention and action in the administration of justice. The book is subtitled Poems, but only at intervals does it feature the standard conventions of modern verse: line-breaks, melody, metaphor. These

“prose-poems” draw upon and incorporate large chunks of prose from various sources into the text.

For example, the first piece, “Omar Khadr is not Harry Potter,” an extended comparison between these troubled adolescent protagonists includes numerous quotations from George W Bush, US soldiers involved in the capture of Khadr, US Congressional statutes and committee hearings and the UN Convention Against Torture, balanced by appropriate quotations from the JK Rowling series and a paraphrase of some of the antics of its cast of characters. The inventiveness of this original concept, conflation of contemporary boy-hero Harry Potter with a Canadian teenager imprisoned for years at the notorious Guantanamo Bay prison, is enhanced by the variety of characters chosen from the children’s books–Sirius Black, Voldemort, Dudley Dursley, Draco Malfoy–and serves as foil to significant others in Khadr’s life.

The poet makes terse, ironic asides throughout, which develop into a dialogue between authorial voices in the Osama-Bin-Laden-as-Voldemort section of “Omar Khadr’s Extended Family Is Not Harry Potter’s Extended Family:”

The wry humour evident in the selection of conversational snippets working at cross-purposes is very effective. But I want more of this. It’s a clever strategy, poet as orchestrator of verbal collage, but the volume of quotation and paraphrase of the Rowling material and various “news” sources overwhelms the poetic voice.

The central section, “Enquiries Concerning Human Misunderstanding: Theory, Speculation, Practice” is the strongest section of the book for the same reason. Here, each numbered piece includes a brief opening quotation from 18th-century Scottish philosopher David Hume’s Enquiries Concerning Human Understanding, followed by two responses from the poet. The first, an analysis of the politics of a contemporary relationship in prose, is addressed to an absent lover/ex-lover–musings on their rare connections and many misconnections. The second response consists of short bursts of imagery set in italics: exquisite jewels of a brooder’s solitary walks in the rain, hoping to run into her old love somewhere.

From the fourth section, “Skeptical Doubts Concerning the Operations of the Understanding, Part II,” here’s the “Speculation” and “Practice:”

This is one consistently observable
effect I have had on you: you sleep well
beside me. (But. In your experience, my
type hurts. [and hurts, and hurts.])

at each threshold, lower the umbrella,
enter, exchange rain and exhaust for coffee
and smoke. check all tables. return to the
doorway. raise the umbrella.

The final long poem, “A Case/E Case,” is a raw, wide-eyed inquiry into two controversial Canadian court cases involving sexual assault, one in Manitoba in 2005, the other in BC in 2008, interspersed with “illustrative quotes” from Marie de France’s 12th-century lay, “Bisclavret.” The multi-voiced interplay of preamble, re-enactments, testimony and victim-impact statements encodes the poet’s corrosive vision of life in the Canadian court system for victimized Canadian women.

2..
Then Adem said
to his buddies:

“Do
what you want
with her.”

Human Misunderstanding is an ambitious and challenging fourth book for an Atlantic Canadian poet who is dedicated to bending conventions of literary practice in terms of what constitutes a poem and to questioning the values of justice for women and the disadvantaged in a post-modern global society.

Michael Pacey is a New Brunswick poet. He is author of Electric Affinities, The First Step and Anonymous Mesdemoiselles.