John Terpstra’s Mischief is a Beautiful Garden in Full Bloom 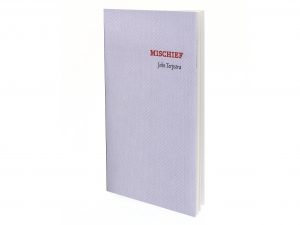 “Why can’t you write poems about flowers or other happier subjects?”

That was a question asked of me by a mother-figure boss I once had. That question of hers has never left me. It resurfaces now and again and most recently as I read John Terpstra’s latest volume of poetry, Mischief.

On the cover description of the book, it says Terpstra “chronicles the unfolding of our everyday lives with a playfulness and easy intimacy reminiscent of poets like Alden Nowlan and Al Purdy.”

This, coupled with the title, sounds like my former boss might approve of poems that seem as though they’d be playful and happy. But she wouldn’t like these poems either.

Though these gentle poems touch on many subjects including carpentry, eggs, Italian songs, trees and other green things, they aren’t cheerful diversions. Instead they are poems that ponder the mystery of death and dichotomy as matter-of-factly as a pretty bunch of flowers might nod to the setting sun.

My former boss, if she were to read these poems, would find a church-going carpenter who sat in his garden writing a poem instead of fixing the window sills before the painters came in to finish the renovations. She’d find someone who knows that sometimes a poem is the only way to grapple with the mystery of flowers and rivers and the distance between us and everything else.

In my mind’s eye is a beautiful garden in full bloom. Amongst it are dropped leaves, spent seeds and a rich loam of experience ready to be seen, when one is ready to see it all. Terpstra’s Mischief invites you to see beyond the pretty flowers of life’s distractions to the cornucopia of meaning strewn at our feet.