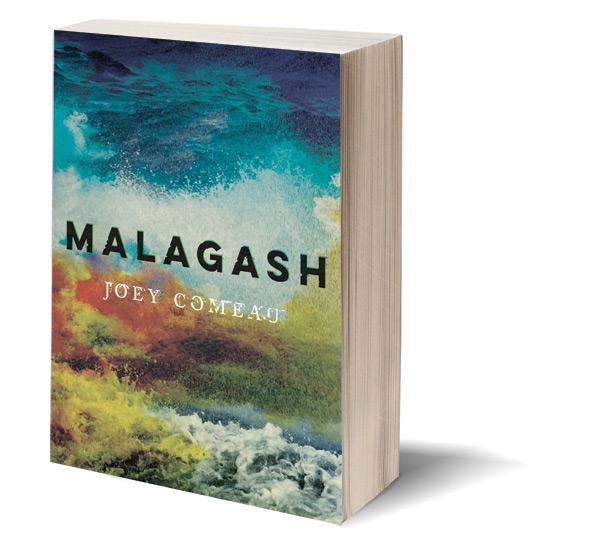 “And if words mean something to you, if an idea moves you, aren’t you changed, just a little?” This is the question that teen girl, Sunday, poses as she records the words of her dying father. Each night she takes these audio files and parses them, indexing sound bites into a database—every heartfelt “I love you,” every terrible dad joke, every syllable of their secret phrase “Goodbye forever.” Even as the cancer spreads in her father, Sunday’s goal is to code and transfer this database into a computer virus that she will unleash upon the world after he passes. In that way, she hopes he will live forever.

Joey Comeau’s latest book takes place in the eponymous town of Malagash. Sunday’s family has moved to her father’s place of birth and settled into his childhood home with her grandmother as they prepare for the inevitable. Malagash is a straightforward but beautifully wrought story about a young girl’s unique means of coping with her father’s mortality. It’s a bittersweet novel but ultimately one that is filled with hope.

Sunday is a believable character who lives in her head and spends a good deal of her time hidden in a closet, where she has three computers set up to write and test code. In her own words, “I am going to summon the dead.” So it is that Sunday takes on a morbid fascination with preserving her father’s memory, even as he’s still living and breathing. Time is precious, life is fleeting, but code can live on eternally. The virus she writes is “a ghost story that computers tell one another in the dark.”

In a lot of ways, it’s quite fitting that she would use a virus to spread her father’s memory as it is metaphorically like the cancer that is killing him. She even admits at one point, “the virus will just do what it wants. It will be itself.” Although there is some discussion of coding as it pertains to Sunday’s obsession, Comeau doesn’t overwhelm the reader with computer jargon. Incidentally, the chapter headings are DOS input prompts which add a nice touch for those who used computers before the advent of Windows.

The chapters themselves are quite short, much like the recordings that Sunday makes. They include poignant observations about life and death such as the formulaic nature of obituaries found in newspapers and the notion of “winning the fight against cancer.” It is easy to slip into cliché when writing about the subject matter but Comeau handles the topic of mortality with grace and humour.

The author portrays the relationships between Sunday and her family in a believable manner. Her mother has an almost unwavering strength in the face of cancer, her gay uncle visits to make amends with his dying brother and her grandmother is always there to simply listen.

It is the development of the brother-sister dynamic though that is perhaps the most heartful. Because of a significant gap in age between them, Sunday begins the book referring to her brother mostly by the nickname “the waif.” However, the circumstances of their father’s terminal diagnosis brings the siblings closer together, particularly when she explains what she’s doing with her recordings.

When Sunday accidentally records a conversation her father has with her brother, she begins to understand that her father can never be fully realized in code because she’s only getting one view. This revelation motivates her to capture all of her father’s last words, but without the permission of others. While her actions raise questions about privacy (online and otherwise) as well as digital legacy, Malagash leaves them unanswered.

Likewise, any expectation raised by the book’s title of exploring life in small town Nova Scotia are thwarted. While the setting is a part of the characters’ experiences, it certainly isn’t the focal point of the overall story. Rather it is a backdrop to the greater story, that of one girl’s attempt at grappling with loss.

Malagash is a unique take on death in the digital age. Comeau presents a forthright yet eloquent story about life, death and what we leave behind. Highly recommended.

Kat Kruger is chief wordsmith at Steampunk Unicorn Studio, offering a wide gamut of storytelling, workshop and publishing services for clients in the entertainment and gaming industries. She is also an acclaimed YA author, having written the novel adaptation of Bruce McDonald's film Weirdos as well as the Lycan Code series (formerly the Magdeburg Trilogy), which has been translated in German by Random House.