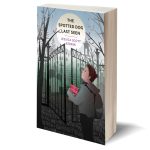 In The Spotted Dog Last Seen, all Grade 6 students at Queensview Elementary are required to work on community projects during their final term and—bad luck—Derek was sick on sign-up day. So now he’s stuck cleaning old gravestones sullied and damaged by a century’s worth of inclement weather. He’s not surprised when the work triggers confusing and heartbreaking nightmares he’s often had about his friend, Dennis, who died after being hit by a car when the much-younger boys were playing together.

Derek is paired for graveyard duty with a couple of classmates, Pascal and Merilee, and the kids spend the first few rainy graveyard sessions in the library learning about the job they’re undertaking from three taciturn curmudgeons. But when the three school friends unexpectedly find a few code words pencilled in a mystery novel’s margin, they slowly assume the mantle amateur sleuths. By digging deep, the three discover the story behind a time capsule at their school and one of the curmudgeons overseeing their graveyard work. The answers Derek discovers bring his nightmares to an end.

The Spotted Dog Last Seen is the latest offering from Halifax-based novelist and NSCAD grad Jessica Scott Kerrin. It’s a clever mystery that will hook middle-grade problem solvers, provided they stick around during the slow early chapters which set the scene. Kerrin is fine writer and there’s hardly a wasted word. The book delves into some very weighty issues, including guilt, death, loss and anxiety, with a quiet, understated sympathy. The final chapters are moving and the story races towards a sweet—though somewhat convenient—conclusion.

More than once, I wished for a little more depth. Derek is nicely rendered, but his classmates and the curmudgeon who becomes his “friend” feel somewhat hollow and indistinct. But these are quibbles. This is a fine mystery for young readers that might inspire a love for the mystery genre, and that can only be a good thing.